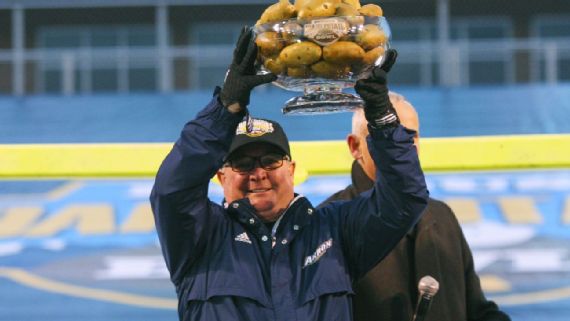 The Zips got out to an early lead with 10:38 to play in the first quarter, as running back Tyrell Goodman completed a 14-yard touchdown pass to quarterback Thomas Woodson to put the Zips up 7-0, as Coach Bowden was not afraid to pull out some unconventional methods in the bowl game.

Kicker Robert Stein would tack on a field goal to build the Zips’ lead up to ten late in the second quarter, but the Aggies would answer back and make it a 10-7 game with a minute and a half to play in the first half.

Stein hit his second field goal of the night to close out the first half, and the Zips entered halftime, leading 13-7.

The Aggies gained the lead for the first time of the night on the opening drive of the second half, but the Zips drove 40 yards down the field and running back Donnell Alexander punched in a two-yard touchdown to make it 20-14 with 5:43 to play in the third quarter.

Akron was able to make it a two-possession game with 8:15 remaining, as Stein hit his third field goal of the night, a 46-yarder, which made it 23-14.

Utah State would score a late touchdown with 1:12 to go, but the Zips would hold on to win 23-21, and finish their season with a record of 8-5, winning five straight to close out the 2015 campaign.

The Zips have come a long way from going just 3-33 between 2010-2012, and Akron’s defense deserves a ton of credit for the Famous Idaho Potato Bowl victory, as they forced three turnovers on the night.