The Tribe fell again in their fifth game of Cactus League action, losing to the Giants 6-2.

Here are five notes from the game.

The Indians are now 0-2-3 through five games. Too bad this isn’t hockey, or they’d have three points. But it’s Spring Training. So it really doesn’t matter. Let’s win one for the gipper on Sunday!

2. Cy Kluber in the Desert

Corey Kluber has an outlaw gunslinger aura about him. If he lived in the 1850’s he might have been right alongside Jesse James and Billy the Kid. But the tool of his trade is his rocket arm.

Kluber made his first start in the Wild West of Goodyear, Arizona and struck out three batters in two innings. He did not allow a runner to reach base. Picking up right where he left off. 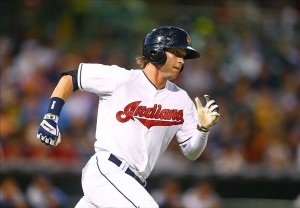 Forgive the dumb rhyme. It’s a habit. But Tyler Naquin is off to a great start through five games.

He made his third start, playing center field, and continued to impress. The left-handed hitter went 1-for-3 with a double.

He is now 4-for-10 with a triple, a double, and two singles, collecting a hit in four of the five games in which appeared.

If Tribe fans aren’t confident in the group of outfielders with a bit of Major League experience who are fighting for a spot, Naquin is a promising young prospect.

If the first-round draft pick from 2012 continues to play like this, we might see him in Cleveland on Opening Day. 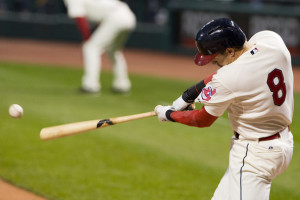 4. What’s Up with Lonnie and Rajai?

Although there is only so much to be taken away from Spring Training, it is a bit odd that Lonnie Chisenhall and Rajai Davis have yet to reach base.

Davis, who many believe will be starting in the outfield on Opening Day is 0-for-9 in three games played. He hasn’t even drawn a walk. He has struck out five of the nine times he stepped up to the plate.

Whether Davis is playing in left or center field in April remains to be seen, but for everybody’s sake let’s hope he manages to get on base sometime in the near future.

Chisenhall is expected to be the starting right fielder. He’s 0-for-7 and has not drawn a walk yet.

The Tribe’s outfield is full of question marks and will be something to keep an eye on all Spring. The two healthy guys who are most likely to have jobs are 0-for-16 to start camp.

5. Josh Tomlin off to a Rocky Start

Tomlin made his second appearance of Spring Training. It was his second-straight rough outing. The right-hander allowed two earned runs in two innings, surrendering four hits.

He has now pitched three innings this Spring and allowed three earned runs.

The Tribe will look to win their first Cactus League game of 2016 on Sunday when they travel to Maryvale Baseball Park to take on the Milwaukee Brewers, who are unbeaten. Carlos Carrasco takes the hill for the first time of camp.