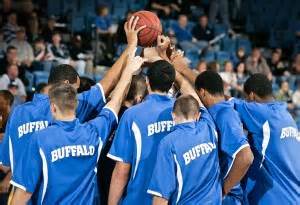 The second semifinal was between the #2 ranked Ohio Bobcats and the #3 ranked Buffalo Bulls. Both teams won decisively in the quarterfinal round, with Ohio defeating Northern Illinois and Buffalo defeating Miami (OH) University.

The game started off with both teams shooting at will. The shots weren’t falling at an efficient rate for either team, as both teams were shooting below 35% from the field with 10:45 to go in the first half.

With Buffalo leading 21-17, the Bobcats turned to MAC Player of the Year Antonio Campbell. Campbell contributed nine points with 5:45 left to play in the first half, but Nick Perkins and Willie Conner kept the momentum on the Bulls’ side. Buffalo went on a 13-5 run to end the half, heading into the locker room leading 41-29.

Buffalo was extremely efficient from the three-point line in the first half, going 7-for-14. Ohio had trouble in that area, only hitting three out of twelve attempts.

Both teams came out strong offensively to begin the second half, with the three-ball falling efficiently for both teams. It looked like whoever made more three-pointers would win this game.

The Bobcats started to gain some momentum, cutting the deficit to five with 14:20 left to play in the game. Just when it looked like Ohio was coming back, Buffalo came right back with the three-point shooting barrage. With 7:37 to go in the game, Buffalo led Ohio 67-58. Ohio battled back again, with two straight baskets.

Buffalo had an answer for that, as they seemed to counter every Ohio basket with multiple baskets. With 4:03 left in the game and down by fifteen, Ohio called a timeout to regroup.

After a few missed shots by both teams, Kenny Kaminski hit two free-throws just to be matched by a Lamonte Bearden layup. The Bulls’ seemingly couldn’t miss in the second half, as they finished off their excellent shooting night with a 88-74 win. Buffalo will face #1 Akron in the MAC Tournament Championship on Saturday, March 12 at 7:30 pm ET.