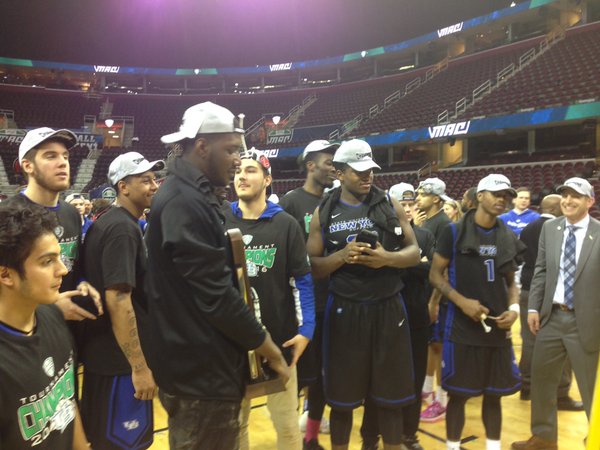 The MAC Tournament Championship game was ready to get underway between the #1 Akron Zips and the #3 Buffalo Bulls.

The Zips’ journey to the finals was not an easy one, as they battled in a tough game against Eastern Michigan all the way to the end and then defeated an upset-minded Bowling Green team to get to Championship Saturday.

For the Bulls, the journey started off with a dominating win over Miami (OH) and finished with an impressive shooting night to defeat the Ohio Bobcats, the #2 seed in the tournament.

Before the game started, there were three questions to ask:

1. Can Buffalo stop Isaiah Johnson?
2. Will Buffalo continue their success shooting the three-ball?
3. Which Sophomore would have better success, Antino Jackson for Akron or Lamonte Bearden for Buffalo?

These questions would be answered throughout the game.

The game started off with both teams shaking off the nerves. Lamonte Bearden got the Bulls on the board first before Aaron Jackson got fouled and hit both free throws, tying the game up at two apiece early.

Buffalo was able to jump out to a 12-5 lead with 14:41 to go in the first half. The Bulls were used to big leads throughout the tournament, winning their previous two tournament games by double-digits.

Buffalo was able to get their three-point shots to fall early, with CJ Massinburg. Antino Jackson was able to get going for the Zips, who needed their Sophomore guard to make big plays in this game. The Bulls started to make mistakes, letting the Zips get back in the game thanks to Johnson.

The only aspect of the game hurting Akron was their three-point shooting, as they three for thirteen early with three minutes left in the game. That didn’t stop the Zips from hitting big shot, as they battled all the way back to tie the game at 33 after a Josh Williams made a three-pointer.

Buffalo was having the same success shooting beyond the arc that they did last night. With ten minutes left, the score was 52-44 in favor of Buffalo. Akron realized that they needed to dig deep, and they did.

After two big three’s by Reggie McAdams to cut the deficit to one, Buffalo called a timeout to regroup. The Zips carried their momentum and took a 55-54 lead with 6:23 left in the second half.

McAdams and Johnson started to take over for the Zips, as Buffalo stayed calm to regain the lead.

With Buffalo back in front, the Zips committed a costly turnover which led to a Buffalo layup. The Bulls led 58-55 with 3:33 to go in the second half and as the game started to wind down, the intensity started to build.

After a big three-pointer by Antino Jackson, the game was tied at 58 with 2:20 left to play in the game.

Jackson hit another three to make the score 61-58 Zips.

After a missed shot by Bearden, Blake Hamilton got a huge offensive rebound and hit a three to tie the game at 61 with 1:39 to play. After turnovers by both teams, Akron gave the ball to Johnson.

After a missed shot by Johnson, Buffalo had the ball with twenty-nine seconds left. The Bulls delivered, with Hamilton hitting his third three of the game with two seconds remaining.

After an Akron timeout, the Zips looked to go the length of the court and force overtime. The pass was stolen by Buffalo, who dribbled out the clock to win the MAC Championship and advance to the NCAA Tournament.