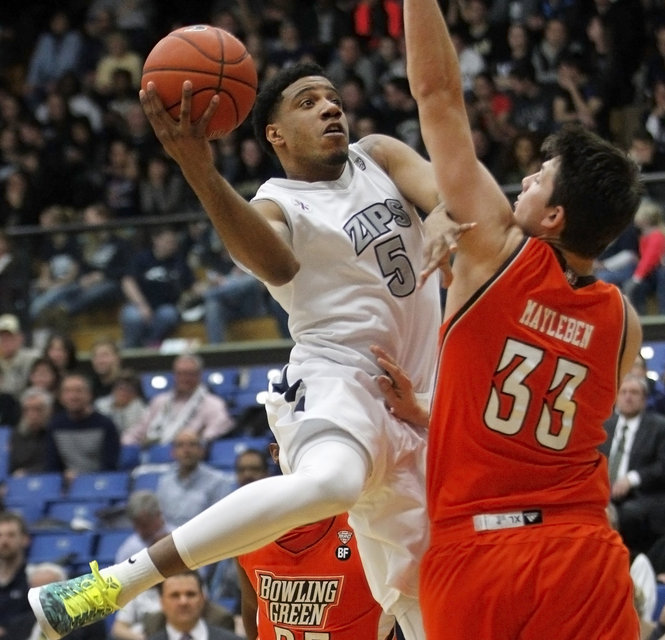 The first semifinal game of the MAC Tournament was between the #1 ranked Akron Zips and the #12 ranked Bowling Green Falcons.

Bowling Green was coming off an outstanding win over #4 Central Michigan on Thursday, as Freshman Antwon Lillard hit the go-ahead three-pointer late in the game to pull off the upset.

The game started off with both offenses getting to work, as attacking the rim was a key early for Bowling Green compared to the long-range shooting that Akron brought into the game.

The Zips held a nine-point lead with 9:35 left in the first half. The Falcons had to start relying on the freshmen duo that got them to this point in the tournament.

Lillard had only taken three shot attempts in the first 13:17 of the game, having a total of four points.

Demajio Wiggins was held scoreless for most of the first half. Spencer Parker had seven points with 3:52 to go in the first half to keep the Falcons in the game.

Isaiah Johnson made a big impact in the first half, having much better success shooting free-throws early in the game compared to Thursday’s win, where he went 3 of 8 from the charity stripe. At the end of the first half, Akron led Bowling Green 41-35.

Bowling Green was in a familiar situation, as they were down by six points going into halftime on Thursday before outscoring Central Michigan by nine in the second half.

Akron was able to withstand the Bowling Green run, putting their trust in Johnson offensively. He delivered and Akron was up 58-52 with 11:22 left in the game.

After a missed shot attempt by Bowling Green, Wiggins drew a costly fourth foul and went to the bench. Johnson was opening up a lot of opportunities on both sides of the floor for the Zips, as they led the Falcons 65-56 with 7:32 to go.

The Zips had a twelve-point lead with 2:10 seconds left and would cruise to victory after that, winning the game 80-66 and advancing to the finals. They would face the winner of the Ohio-Buffalo game, who play on Friday night.