3 Down, 8 To Go: Indians Sweep Red Sox in ALDS to Advance to Meet Jays in ALCS 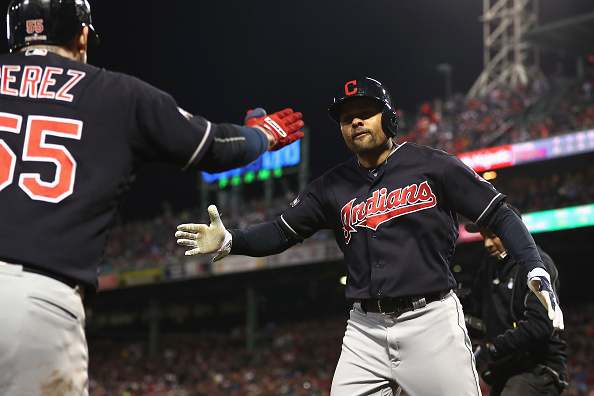 A gritty effort from Josh Tomlin, and a couple of innings from the bullpen along with a huge pair of hits by Tyler Naquin and Coco Crisp was enough for the Tribe to grind out a 4-3 win.

The victory clinched the teams’ first sweep of a playoff series since they swept the Red Sox in the 1995 ALDS, a series that was the start of a run to the World Series where they eventually lost to the Atlanta Braves.

Monday the two offensive stars were Naquin, who hit a two-run single to put the Tribe up 2-0 in the fourth off starter Clay Buchholz, and Crisp, who slammed a two-run homer off Drew Pomeranz to give the Indians a 4-1 lead at the time in the 6th.

Boston got two on in the 9th, but Cody Allen was able to retire Travis Shaw to secure the win and give the Indians their first trip to the ALCS since 2007.

Tomlin turned in a great performance, going five innings, allowing two runs on four hits with one walk and four strikeouts. Andrew Miller threw two innings, allowing a hit, a walk and three K’s, and Bryan Shaw threw two-thirds of an inning, giving up a run on a hit.

Allen had to work for everything, but in the end like Thursday night got the job done as the Indians pulled off the three-game sweep by outscoring the Red Sox 15-7 in the three wins.

Next up is a team they had some great games against in the Toronto Blue Jays, a club they beat four of seven times in 2016.

Game one of the ALCS is set for Friday night at 8pm at Progressive Field.