It’s finally here, draft week 2022 is upon us and action gets underway Thursday night at 8 pm live from Las Vegas. Some mock drafts get fancy and project trades, but this one is straightforward, picking for the teams in the slots they have pre-draft. Anything could happen come Thursday night but here are my best projections for what teams will do. So, let’s get to it. Here is my 2022 NFL Mock Draft.

For the longest time, Aidan Hutchinson was a lock to go in the top spot. In the last couple of weeks, rumors out of Jacksonville are the team is going to do something unexpected. GM Trent Baalke prefers his edge rushers have long arms, something Walker has that Hutchinson does not. 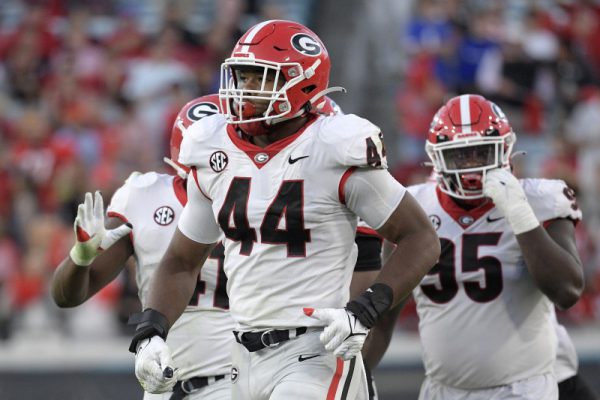 This could arguably be the steal of the draft. Hutchinson was a lock to go number one for the longest time until we entered “silly season.” The Lions need a lot and Hutchinson, a Michigan product, is the perfect fit.

The Texans have two picks in the top half of the first round and the top three tackles will be gone before they pick at 13. With Laremy Tunsil under contract for one more season, Neal can play right tackle and eventually move to the left side when and if the team moves on from Tunsil.

It’s been a long time since the Jets had a lockdown corner and Sauce Gardner is just that. Gardner allowed zero touchdowns on 138 career targets and instantly improves the Jets’ porous passing defense. 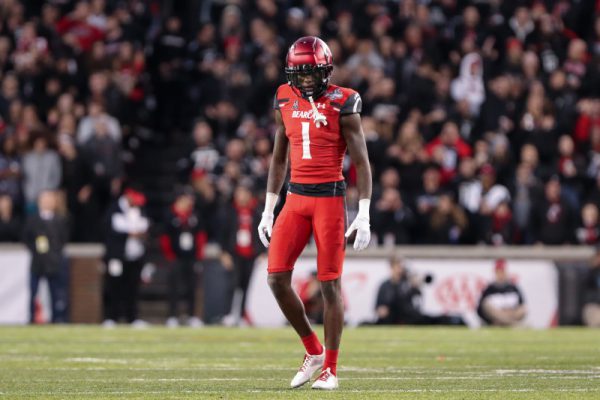 Among the draft week rumors are that the Giants love Charles Cross. Andrew Thomas has been great at left tackle so Cross would line up on the right side. They pick again at 7, but if they want to get their guy, they have to take him at 5.

This is the first spot we could potentially see a quarterback go, but I think the Panthers would be better suited to explore a trade for Jimmy Garrapolo or Baker Mayfield. Adding Ekwonu would provide a boost to both the passing and rushing games.

Kayvon Thibodeaux is a pass-rushing machine, racking up 9 sacks and a 91.5 pass-rush grade in 2021, according to Pro Football Focus. Pass rushers like Thibodeaux don’t come around often and the Giants should rush to turn in this pick.

Longtime QB Matt Ryan was shipped off to the Colts, so the Falcons are on the hunt for a QB for the first time since 2008. Willis, an Atlanta native, has a big-time arm and could even sit for a while behind recently signed Marcus Mariota, though they may opt to go Willis from the start. 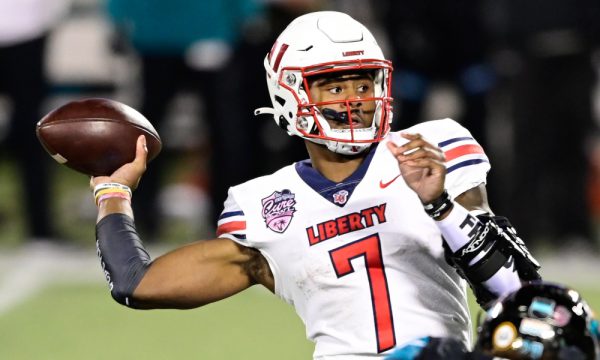 Jermaine Johnson has shot up draft boards since the end of the college season. Johnson burst onto the scene last season at Florida State with 14 sacks and would improve a Seattle defense that ranked 23rd in the category last season.

The Jets went defense with their first pick and get young quarterback Zach Wilson a big-time pass catcher. London put up 1,084 yards and 7 touchdowns in just 8 games a season ago and has the widest catch radius in the class.

The ideal receiver for the Commanders would have been London, but with him gone they take Garrett Wilson, adding another Buckeye to their receiving room. Wilson led a loaded receiving group last year in Columbus with 1,058 yards and 12 touchdowns, giving newly acquired Carson Wentz a big-time weapon.

The Vikings brought back veteran CB Patrick Peterson on a one-year deal, but there isn’t much at the position besides him. Stingley is one of the most polarizing prospects in this class, having not had a healthy, productive season since 2019. If he can put it together and stay healthy, Stingley could be a steal at 12.

Like Stingley, Hamilton is a prospect there isn’t really a consensus on. I’ve seen him go anywhere from 2 to the Lions all the way down into the 20s. The Texans need just about everything so it’s worth it to take a shot on Hamilton. 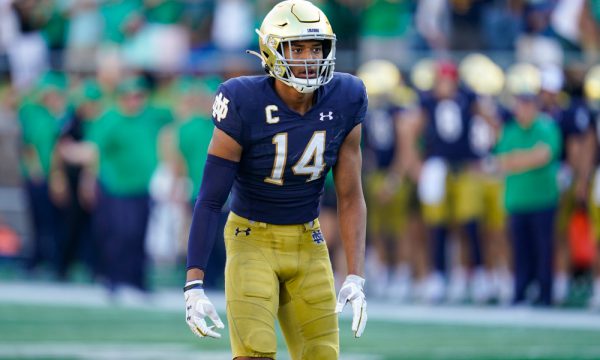 The Ravens lost center Bradley Bozeman to the Panthers in free agency, leaving a big hole in the middle of their line. Linderbaum was the highest-graded center in college football the last two seasons, according to PFF, and will lock down the position right away.

The Eagles have taken receivers in the first round the past two years but, with such a loaded class and two first-round picks, they shouldn’t resist trying again. Williams put up 1,561 yards and 15 touchdowns before tearing his ACL in the national championship. He probably won’t be ready to start the year but, when he is, he gives Jalen Hurts a big-play weapon.

New Orleans was all in on Deshaun Watson, meaning they aren’t fully sold on Jameis Winston. Pickett is the most pro-ready quarterback of the bunch, and his small hands shouldn’t be as much of an issue playing in the dome. 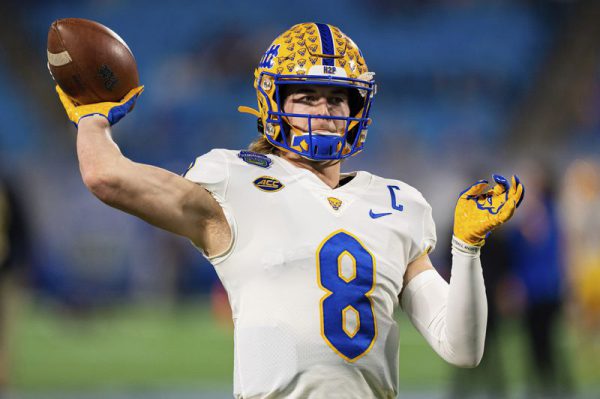 The Chargers took Rashawn Slater a year ago, but still, have a hole on the right side of the line. Penning is an absolute mauler in the run game and though he played left tackle in college, he shouldn’t have an issue moving over to the right side.

Fletcher Cox is 31 and is set to become a free agent at the end of the season. Jordan Davis is almost comically large and could fill that role for years to come.

Terron Armstead left in free agency, leaving a huge hole on the offensive line. After drafting a quarterback, they could be tempted to get him a weapon, but they should look to keep him upright instead.

If I had to pick one team likely to move up, it would be the Steelers looking for a quarterback. Since I’m not messing around with trades, the Steelers take Ridder at 20. I wasn’t as high on Ridder, but I’ve seen quite a few mocks with him going at this spot. 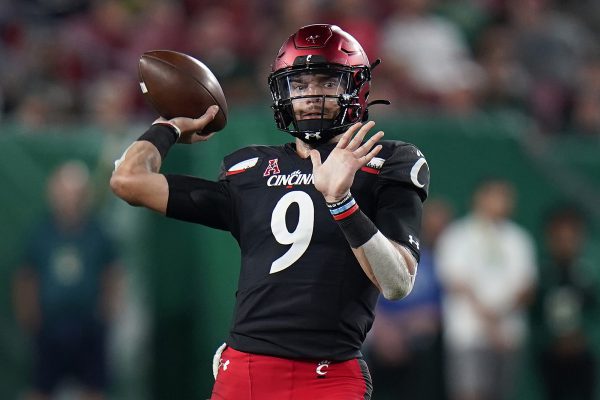 Bill Belichick loves versatile linebackers and the top one in the draft falls into his lap at 21. Lloyd is the most well-rounded linebacker in the class and can fill a variety of roles for the Patriots.

Finally, Green Bay takes a wide receiver in the first round, the first of the Aaron Rodgers era. Olave, who put up at least 700 yards and 7 touchdowns each of his three seasons, would have been a top pick a year ago and gives Rodgers a dependable target.

Chandler Jones left for Las Vegas in free agency and JJ Watt is getting up there in years. Karlaftis is a powerful bull rusher and has the versatility to line up inside or outside.

Dallas decided to move on from left guard Connor Williams and doesn’t have a suitable replacement on the roster. Kenyon Green is the top guard prospect in the class and has the versatility to line up elsewhere if necessary.

The Bills have nobody outside of Tre’Davious White, recovering from a torn ACL, of starting caliber. McDuffie is the best zone corner in the draft and should fit in well in Leslie Frazier’s defense. 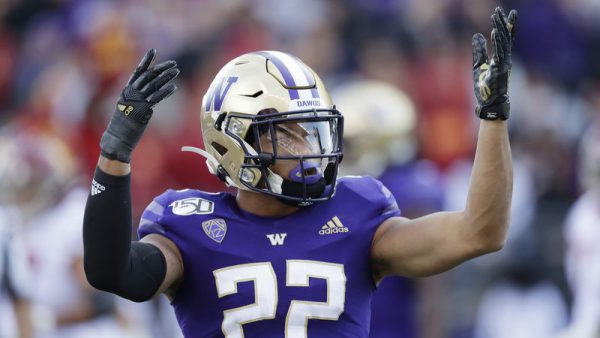 The Titans released Rodger Saffold and Nate Davis is set to hit free agency at the end of the year. Instead of waiting until next year and potentially needing to fill both holes, the Titans snag Johnson who is a Day 1 starter

Losing Antonio Brown might tempt the Bucs to take a receiver here, but pairing Wyatt with Vita Vea inside fills a need and gives Tampa Bay a real force in the middle of their defense.

The Packers finally got Aaron Rodgers a receiver with their first pick, so they turn to the defensive side of the ball this time. Dean is a high-energy, high-IQ linebacker who flies around the field and fills a need at inside linebacker.

The Chiefs’ secondary took a hit in free agency and though Hill is technically a safety, he is a perfect nickel defender who can really lay the wood when it comes to tackling.

The loss of Tyreek Hill means there is a need for a wide receiver, but the Chiefs need help on the edge and a prospect like Ojabo is tempting. One of the top edge prospects before his injury, taking Ojabo here in the first would give them a 5th-year option on his contract, giving them a little extra time to bring him along. 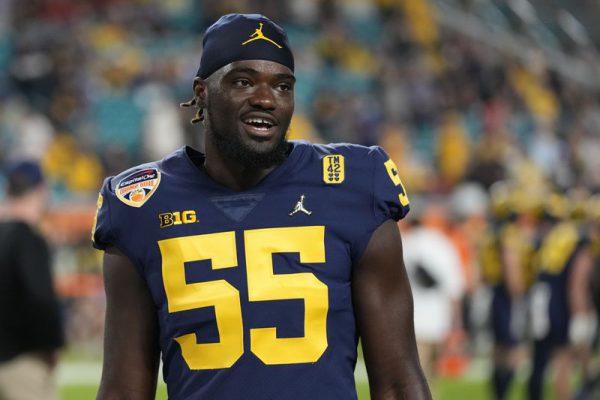 The Bengals filled their offensive line needs in free agency, freeing them up to address their secondary. Eli Apple was re-signed but the one-year contract shows the team doesn’t view him as a long-term piece. Booth has the versatility to instantly find a role in Cincinnati’s five defensive back scheme.

The Lions could decide to take a quarterback here for the benefit of the fifth-year option, but they should look to draft someone who can have an impact right away. Cine patrolled the back end of the loaded Georgia defense and excelled at tackling.