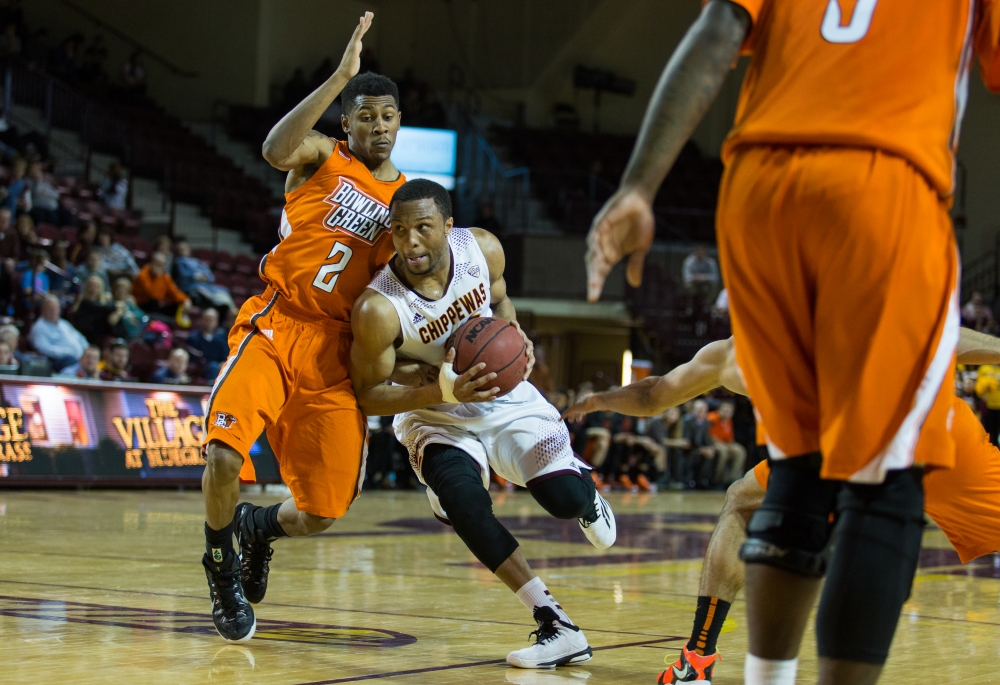 CLEVELAND – The #12 seeded Bowling Green Falcons took the court to face the #4 Central Michigan Chippewas in the second quarterfinal match-up.

The Falcons pulled a big upset over the #5 seed Kent State Golden Flashes on Tuesday night and were ready to pull another upset. Central Michigan was 17-14 this season, as Bowling Green is 15-17.

The game was a defensive battle early on, with the Chippewas leading 16-12 with 7:20 to go in the first half. After a made shot by Central Michigan, Antwon Lillard knocked down a three-pointer to make it 18-15. With 5:45 left in the game, the both teams starting clicking on offense. At the end of the first half, Central Michigan leads Bowling Green 31-25.

The Falcons shot 34.6% from the field, which needed to change if they wanted to come back and win this game. Lillard was the leading scorer for the Falcons with 11 points and Chris Fowler led the Chippewas with 9 points. The first half had everyone in attendance engaged and ready for more action in the second half.

The Chippewas tried to put away the Falcons, extending their lead to eight after a Chris Fowler three. The Falcons came right back with a dunk by Lillard.

After missing the first free throw, Braylon Rayson made the second free throw to increase the Chippewas’ lead to 55-52. After a Bowling Green miss, Rayshawn Simmons drew the foul and went to the free-throw line. Simmons went 1 for 2 from the line.

With 34 seconds left, the Falcons looked for one last chance on offense and got a huge basket by Antwon Lillard, who was fouled on the play. Lillard missed the free-throw and the Falcons were forced to foul Rayshawn Simmons with 23.9 seconds left in the game. After making the first free-throw, Simmons missed the second and gave the Falcons one more chance to tie the game or take the lead.

They did just that, with Antwon Lillard redeeming himself with a huge three-pointer to get the Falcons a 60-59 lead with 13 seconds left. Central Michigan tried to regain the lead but commited a costly turnover to give the Falcons the ball back.

The Chippewas intentionally fouled Ismail Ali to send him to the free-throw line, Ali made both free-throws and the Chippewas had one final chance.

After the timeout by Central Michigan, the inbounds pass was stolen by Bowling Green, who dribbled out the clock for the upset victory 62-59. #12 Bowling Green will face #1 Akron in the semifinals on Friday, March 11 at 6:30 PM ET.