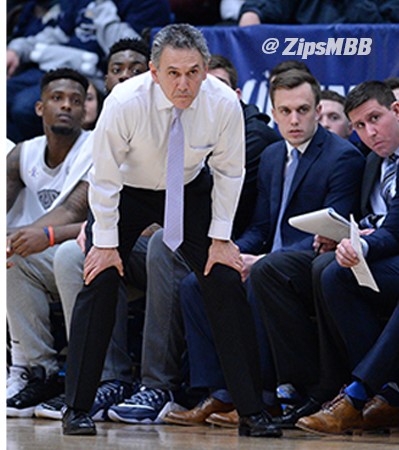 The first game of the day was a quarterfinal match-up between the #1 seed Akron and the #8 seed Eastern Michigan. The Zips came in with a 24-7 record compared to the Eagles 18-14 record.

Akron won the only meeting between the two teams, so the Eagles came in looking for revenge. Eastern Michigan got out to an early 9-3 lead with 15:05 to play in the first half before timeout was called on the floor.

Akron got their offense going late, battling back to tie it up at 20 and then eventually take a 24-23 lead with a little over 4 minutes to play.

The teams had three lead changes in the span of a minute. With 3:23 left in the first half, the Zips led the Eagles 27-25. The Zips had a huge four-point play converted by Senior Jake Kretzer to take a 34-32 lead with a minute to play. Neither team could create distance, as the Zips headed into the locker room with a 35-32 first-half lead over the Eagles.

Senior Reggie McAdams led the ZIps in scoring with 15 points and Redshirt-Junior Raven Lee tallied up 12 points in the first half. The first half kept both teams alert, as there were nine lead changes.

The bench helped the Zips tremendously in the first-half, scoring sixteen points.

Akron needed to come out with a better shot selection if they wanted to separate themselves from the Eagles and ultimately win the game, as they shot 36.7% from the field in the first-half.

Eastern Michigan came out with the same intensity that they had in the first-half, taking a 37-35 lead within the first two minutes of the game.

Akron seemed to lose any surge of energy it had in the closing minutes of the first-half. The Zips found themselves down 50-42 with 10:55 left in the second-half and that’s when the Eagles started to lock down the Zips, who only scored four points in a three-minute stretch.

That’s when the Zips started to get their shots to fall. After a scoring stretch capped off by three-pointers by Antino Jackson and McAdams, the Zips found themselves down 58-53 with 5:03 to play.

After Isaiah Johnson missed two crucial free throws, the Zips found themselves on the upset alert.

Jackson hit a big three-pointer for the Zips, just to be matched by a Lee three for Eastern Michigan. After a missed three-pointer, Akron was able to force a jump-ball and keep possession with 1:03 to go.

Noah Robotham hit the go-ahead three-pointer that brought the Akron faithful to their feet. Eastern Michigan came back down the floor and drew a blocking foul to send them to the free-throw line.

After Lee hit two free throws to get a 63-62 lead, Johnson got to the basket and scored to get the Zips a 64-63 lead. After missed shot by the Eagles, the Zips blew an open layup but were saved by a technical fould called on Eastern Michigan.

The free-throw was made and after a final shot attempt missed by the Eagles, the Akron Zips held on to a 65-63 win over Eastern Michigan.