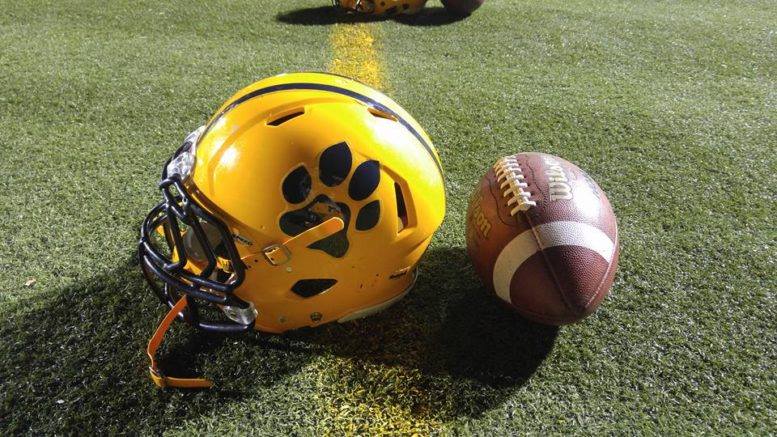 The Knights’ offensive and defensive lines won the day, and in turn, Archbishop Hoban captured a 21-14 win over the host Saint Ignatius Wildcats to start the season.

The Wildcats battled until the end, narrowing the gap from 21-14 in the fourth quarter, but Hoban’s dominant stretch clinched a season-opening win for the Knights. The defeat marks the first loss in an opener since 2013. The loss is the Wildcats’ first at Byers Field since November 14, 2014, ending a streak of 17 consecutive home wins.

The first big play of the game occurred with just over two minutes left in the first quarter. Patrick Delahunty found Nigel Drummond II in the flat, and the senior wideout worked his magic. Drummond evaded a would-be tackler and galloped 59 yards to place the Wildcats deep in Knights territory.

Due to a fierce Hoban pass rush pushing the Wildcats back, the hosts could not take advantage of the opportunity. The Knights blocked a would-be 48-yard field goal with 25 seconds left in the quarter.

On Hoban’s next drive, starting in the first quarter and moving into the second, the Knights gradually picked up yards. Hoban struck first blood with 9:31 in the second, as Jordan Mick found Matt Blanchard in the end zone for a 21-yard touchdown. The extra point was good, setting the score at 7-0.

The Wildcats and Knights then traded punts. With six minutes left in the half, a 16-yard screen pass to Jack Welcsh invigorated the Football Cats. Delahunty and Luke Cooper then connected for a critical third down pickup of 19 yards. Two plays later, Welcsh rammed the ball into the end zone for six. Rory McConville’s extra point rang true, tying the contest at seven with 3:14 left in the half.

To start the second half, the Knights decided to pound the ball using 3-back sets. Mixing in playaction passes to Caden Clark, Hoban’s offense started to gain traction and gradually move down the field. Hoban finished off the drive with an off-tackle run for 21 yards and six points by Deamonte Trayanum. Jacob Branham’s extra point set the score at 14-7 after the lengthy drive.

The Wildcats’ offense could not gain any traction, giving Hoban the ball back. The Knights kept pounding the ball, gaining yards and draining the clock. The third quarter ended with Hoban in possession of the ball and marching down the field.

Early in the fourth quarter, on a critical 4th and 1 play, the Knights dialed up an outside run. The surprise call worked to perfection, with Trayanum finding space on the outside and rolling 43 yards to the end zone. The extra point stretched Hoban’s advantage to 14 points, 21-7.

A key break went to the Wildcats on the punt. A Hoban player accidentally touched the punt, and the Wildcats dove to grab it. A Saint Ignatius player emerged from the dog pile with the ball at the 27-yard line, a much-needed turnover for the hosts.

The Knights stood strong, however. Hoban blitzed and notched back-to-back sacks, preventing the Wildcats from taking advantage of the fortunate turnover.

The Wildcats’ defense stepped up to force a Hoban punt, giving the Wildcats’ offense a chance to work, albeit deep in its own territory with 5:30 remaining. Connor Cmiel caught four passes in a row from Delahunty to march down the field and breathe fresh life into the Wildcats’ hopes.

Following the plethora of Delahunty-to-Cmiel connections, the Wildcats completed the drive with 4:19 left. Delahunty dashed to paydirt on 9-yard scramble up the middle for six. McConville tacked on the extra point to narrow the deficit to 21-14.

On the ensuing drive, the Knights continued to pound the ball. The Wildcats loaded up the box, but Hoban’s varied formations and strong line play helped the visitors to keep picking up first downs.

The Wildcats did get the ball back with a few ticks left on the clock, but not enough time to complete the comeback.

The Wildcats return to the field next Saturday. The Mentor Cardinals will visit Byers Field for Northeast Ohio’s annual premier public-private rivalry.

You can find pictures and video’s from this game on the official Twitter handle of St. Ignatius Sports at @SIHSSports

The full article including quotes can be found here.