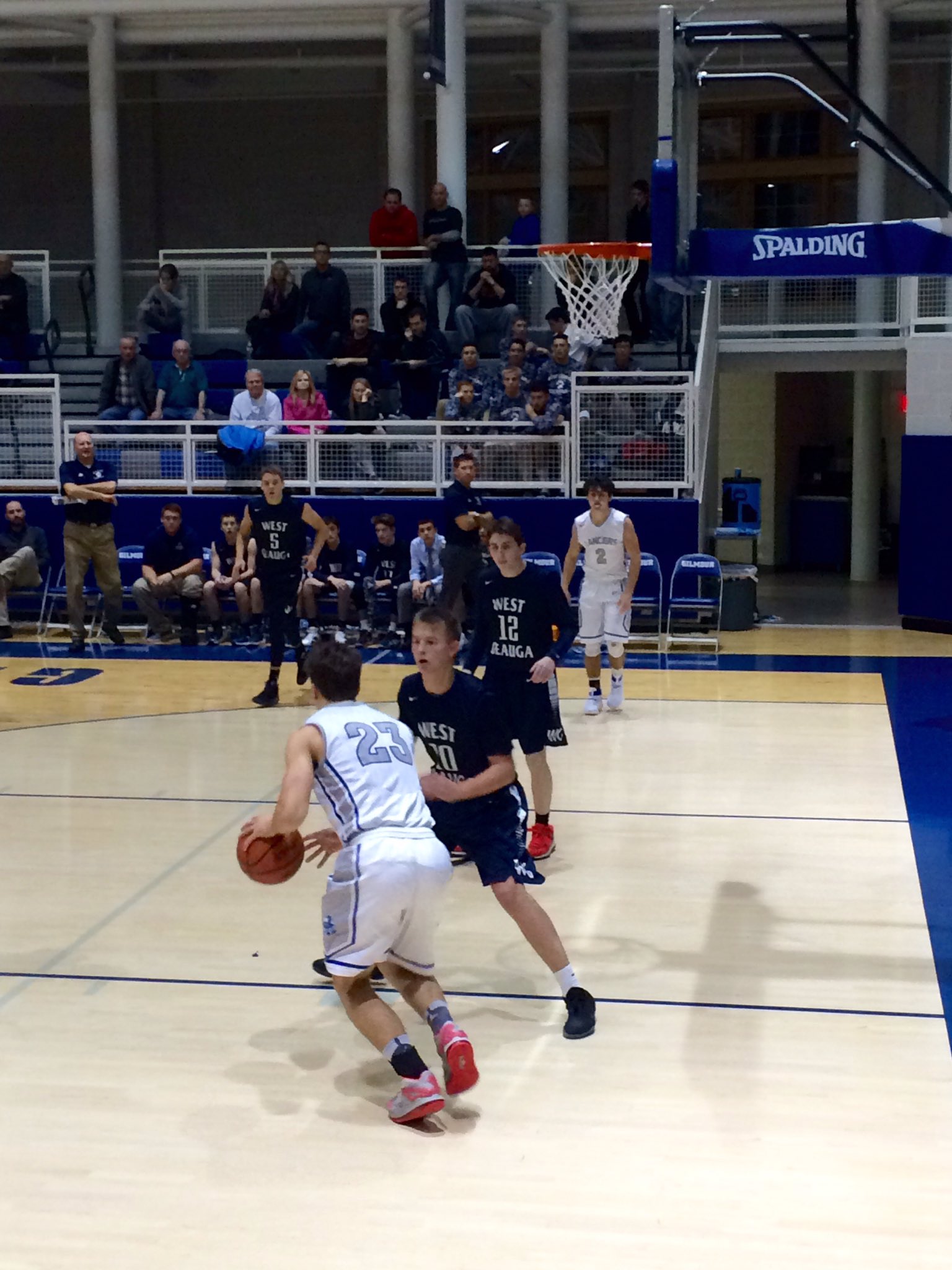 GATES MILLS, OHIO– An early season match-up between the West Geauga Wolverines and the Gilmour Academy Lancers was not one to overlook.

On this night Gilmour was able to execute and get the job done, as they took home a solid 86-69 victory.

Both teams came out looking to run their respective offenses and to set the tone on defense. The crowd was ready and anxious to get this game started as the parking lot was packed as family, friends and students filled the gym ready to cheer on their team.

Early in the first quarter the Lancers came out a little shaky, not making open shots and turning the ball over and missing open passes and let West Geauga get out into the open court allowing for free drives to the basket.

It seemed liked the lancers woke up after playing some sloppy ball in the beginning. Jonny Botek and Jhonny Hollis led the way scoring for the Lancers as they combined for 11 points and helped get the lead back late making it 19-11 for the Lancers to end the first quarter.

C.J. Charleston turned into the star of the second half as he controlled the tempo for the Lancers and kept the ball moving around the court as he seemed to be the main ball handler to make things happen.

However, West Geauga did not let them run away with the quarter as Shenkel tried his best to keep from letting the game too out of hand for his team, he took control of the offense and got to the foul line often to get easy points for his team.

The Lancers, still with the lead late in the second quarter, had the wolverines trying to come back but a great steal and breakout dunk by C.J. Charleston seemed was the spark the team needed to close out the first half as the team went into half time with the momentum and the lead at 35-28.

As the horn for the third quarter blew Charleston looked to pick up where he left off by getting at it early with a steal to help lead the fast break for the Lancers to go up early in the third.

The pace quickened as the Lancers tried to push the pace with fast break play and pressure on defense, with the score at 52-32 in favor of Gilmour early in the quarter it seemed like the Lancers had the game under control.

Micah Young came out looking to score as he kept fighting for his Wolverines getting good opportunities and passing the ball well for his team.

Coach David Pfundstein took his first team out with about five minutes left go which must have sparked something in Mark Sexton because he caught fire leading the Wolverines back from a 20-point deficit to only within nine points by hitting two big threes and an and one play on a drive to the basket late in the quarter to close out a 7-0 run for the Wolverines.

When the final quarter began Sexton kept up his momentum that he gained in the third and came out firing on all cylinders coming out blazing back to back threes to start the fourth quarter as he got his team back to within seven points early in the fourth.

However Charleston kept showing everyone why he is the start on the Lancers by quieting the storm with a fast break pull up three that fired up his home crowd and keeping his team up in the game.

Dechlan Kirinsic played a huge part down low on defense stopping a lot of the Wolverines drives and keeping their shots restrained to outside jumpers as his 6-5 frame was too much to drive in on. Kirinsic and Charleston played the two man game perfectly off the pick and roll as he received two great assists from Charleston to increase the lead to ten points.

With about two minutes left in the game Charleston went down with a leg injury that took him out for the rest of the game which looked to be an opening for the Wolverines.

They could not take advantage as Kirirnsic kept up his great defensive play and did not let the Wolverines team score a field goal in the final minutes giving the Lancer the 17-point win in their home opener.

The two teams fought hard but the early lead was too much to overcome for West Geauga as Kirinsic scored 23 points leading the charge for the Lancers.

Look for the Lancers to try and take this momentum into their next game against Lake Catholic next Tuesday here at Gilmour Academy while the West Geauga Wolverines take on Padua Franciscan in Parma.