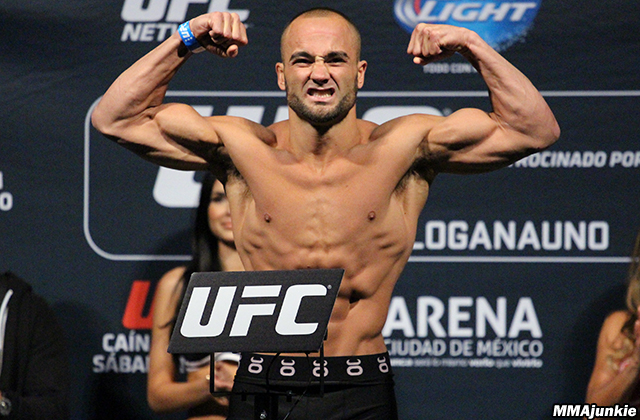 The UFC returns to Calgary for the first time since UFC 149 in 2012.  It was a card so bad, that it is considered one of the worst UFC Pay Per Views of all time.  They hope to wash that bad taste away with what is a pretty solid card tomorrow night.

The card is loaded from top to bottom as it features 3 former UFCWorld Champions.  It is also on FREE television, so make sure you don’t miss it!  The biggest fights and ones with the most intrigue take place on the main card.  Let’s get right to it with some quick predictions!

Prediction – It is hard to think the one time best female pound for pound fighter in the world, Joanna would ever be in danger in losing her third straight fight, but Torres has a dangerous set of tools, and can be a real danger to the Ex-champ.  However, despite the challenges Torres will present, I see Joanna getting back to her winning ways with a dominant decision victory.

Prediction – Speaking of former one time dominant champions on a two fight losing streak, Aldo see’s himself in that same boat.  Aldo, who was once considered the best male pound for pound fighter in the world is fresh off back to back title bout losses to Max Holloway.

His opponent Jeremy Stephens, has been on a tear as of late, winning 3 straight times and making waves in the division.  Before he can really push for a title shot at 145, a win over Aldo will be needed.  It won’t happen however as I see Jose getting back on the winning slate of things with a convincing decision victory.

Prediction – Eddie Alvarez is the third former champion on this card, and one half of the main event.  Dustin Poirier has been a giant “what if” his entire career.  Poirier can never seem to win the big one to get to the next big one.  The “Diamond” is once again in the drivers seat, winning 7 of his last 9.  7 wins, 1 loss and one NC.  That controversial NC came at the hands of Alvarez.

It is all for nothing for both men right now, both stand a chance to challenge for the belt next, so they both badly need a dominant victory in Canada.  Until Poirier wins the big one, I just cannot pick him to do so, especially not against a man as talented as Alvarez.  With that being said it will be a slugfest that Eddie ends early.  Look for the first round knockout from “The Underground King”.

Why 2018 is a make-or-break year for Corey Coleman
Iron Tiger 83 Rocks The Hollywood Casino In Columbus! Recap & Reaction