Trading Joe Schobert Wouldn’t Make Any Sense for the Browns 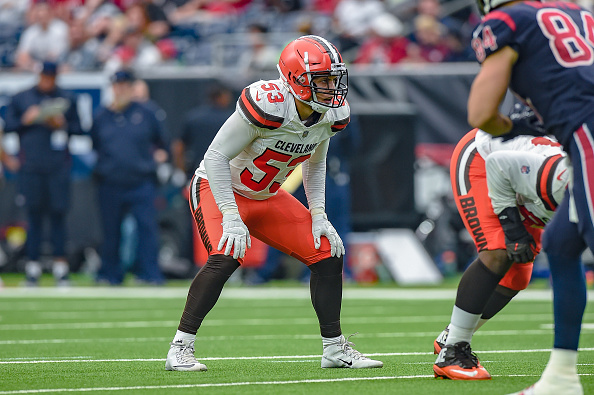 Since arriving as GM of the Cleveland Browns, John Dorsey has quickly jettisoned many of the players who were acquired by the previous regime. For example, of the 14 men former executive Sashi Brown selected in the 2016 draft, only three remain on the current roster (for now).

While some of the players Dorsey has ousted weren’t contributing, others appear to have been moved solely due to their being drafted by Brown.

If the latest rumor is to be believed, this instinct to oust anyone brought in by the past front office is getting a little extreme. For some reason, linebacker Joe Schobert is hearing his name in the rumor mill, as Albert Breer of MMQB hinted the linebacker could be moved by the Browns.

I have to assume there’s no truth to this rumor, if only because trading Schobert wouldn’t even slightly make sense.

There are many obvious reasons for this, most of which are rooted in the fact Schobert is one of the best players on Cleveland’s defense.

After notching just 28 combined tackles in his rookie season, he collected 144 in 2017, which tied for first in the league. Though he saw a decline last year, he was also limited to just 13 games due to injury.

Schobert has proven to be a leader both on the field and off for the Browns, is one of the team’s captains and is viewed as the quarterback of the defense. He went from third string to Pro Bowl in the span of two seasons.

What I’m getting at is there’s very little reason to consider trading him.

Breer has since gone on to clarify that he isn’t necessarily hearing Cleveland is actively shopping Schobert. He’s merely heard his name tossed around in the rumor mill as someone who could potentially be on the move.

Again, though, something like this coming to fruition would be confusing to say the least.

Beyond Schobert’s individual stats, the Browns as currently constructed are also thin at linebacker. After losing Jamie Collins in the offseason, this position is seen by many as a need for Cleveland.

Knowing this, it’d sure be confusing for the team to trade away their lone Pro Bowler from this area of the roster.

Sure, there are a couple factors which would make the idea of thinking about trading Schobert understandable.

For one, he’s heading into a contract year, while top linebackers around the league are getting absurd amounts of guaranteed money. Dorsey may be feeling antsy about overpaying Schobert once his current deal expires.

The Browns are also shorter on draft stock than usual this year, so they’re likely exploring potential avenues to get back into the earlier rounds.

All that said, pulling the trigger on a Schobert trade would be ill-advised.

If anything, it would push the “Dorsey wants to remove Sashi guys” narrative to a concerning new level. Sure, there was no harm done in ousting Ricardo Louis, Corey Coleman or Cody Kessler. Still, dealing Schobert would be caring more about who drafted a player than what he brings to the table.

For all I know, this never becomes anything more than a draft week rumor. It’s silly season after all, a time when it’s difficult to believe anything you hear. Perhaps “Joe Schobert could be traded” is just another example of this.

At least I hope that’s the case. The Browns’ defense still needs some improvements. Removing Schobert from the equation certainly won’t help that matter.

There’s No Sense in Flipping Out About Odell Beckham Jr.’s Twitter Tirade
Meet the Candidates of the Cavaliers coaching search