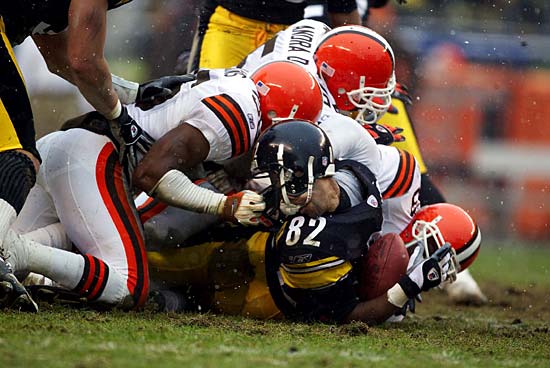 Most of the names on this list didn’t amount to very much during their Browns career. But their names are remembered because of the roles they played in victories over the team’s biggest and most bitter rivals, the Pittsburgh Steelers.

Lost in all the turmoil surrounding this year’s team – the seemingly impending dismissal of coach Mike Pettine and general manager Ray Farmer, the quarterback controversy all season – is that this is “Steeler Week.”

Once upon a time, from 1950-70, the Browns got off to a 32-9 start in this series, winning the first eight games and 16 of the first 18 games the two teams played against each other. In the 80s, the Browns won seven straight games and went 14-8 over Pittsburgh.

Jaded Steeler fan may wonder how someone like me could find 25 winning Browns games against the Steelers. I would like to remind Jaded Steeler Fan that your team only leads the series 66-58, not counting two playoff victories over our beloved Dawgs.

So, in honor of “Steeler Week,” here are my top 25 games between these two squads in this rivalry. Who knows, maybe what happens Sunday can crack this list.

Will Sunday Be Mike Pettine’s Last Game As Head Coach of the Browns?
ESPN’S John Clayton Says Johnny Manziel’s Time in Cleveland is Over