Is Tonight The Last Stand For The Dragon? 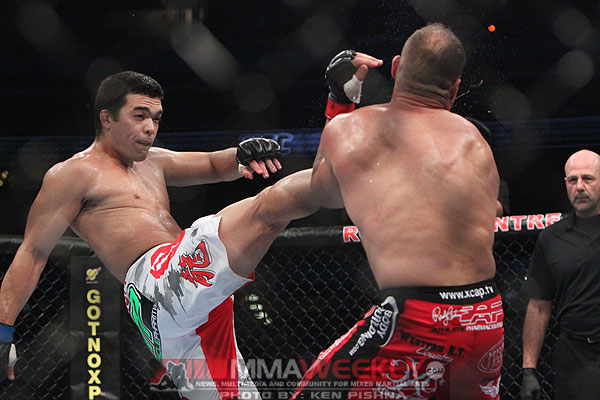 After a long career with many ups and downs, including once being considered as one of the top pound for pound fighters in the world, it all may be over for Lyoto Machida after tonight as he takes on Eryk Anders in the FS1 Fight Night main event.

Machida was an undefeated World Champion in the UFC Light Heavyweight Division as recently as of May of 2010.  No one could touch his Karate style or figure it out, which led to a 16-0 record.  It would all come crashing down on the strength of one right hand from Shogun Rua.

The loss resulted in his title being taken away, and he has never been the same as that once magical style of his, is now pedestrian.  Since being 16-0 and champion, Machida has gone 6 and 8 and looked like a shell of himself.  He failed to adapt and the results have proven that.  He hasn’t won a match since 2014.  Simply put, once fighters adapted to his style, Machida refused to change, and it cost him big!

The man looking to put Machida out of the sport for good tonight is Eryk Anders.  He is 10-0 but with 0 wins of note.  A chance to be the man who ends the career of a legend in Machida, may just be the fight that puts Anders on the map.  This will only be his third fight under the UFC banner.  Five of his ten wins have come by way of knockout.

Also, on the card is former Women’s Bantamweight number one contender Valentina Shevchenko. She is looking to rebound from a razor thing split decision loss to current champ Amanda Nunes.  Shevchenko has won 7 of her last 9 fights, with those only two losses coming against the current champ.  Shevchenko should have any problems putting away Priscila Cachoeira tonight from Brazil.

While the UFC has hosted several events in Northeast Brazil, the event will mark the promotion’s first visit to Pará in the country’s North region.  Tonights card will be held at Arena Guilherme Paraense in Belém, Brazil.

A bout between Germaine de Randamie and Ketlen Vieira was announced for this event. However, the bout was soon cancelled due to a hand injury sustained by de Randamie.

Luis Henrique was scheduled to face Timothy Johnson at the event. However, Henrique was removed from the pairing in early December and was replaced by Marcelo Golm.