Who To Root For In Western Conference Finals 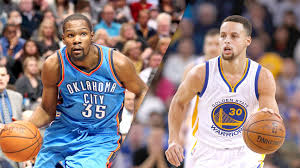 The Cleveland Cavaliers got off to a great start in the Eastern Conference Finals, pummeling the Toronto Raptors in game one. The team seems destined to return to the NBA Finals for the second year in a row but who they play may take some time to determine. Both the Oklahoma City Thunder and Golden State Warriors will be by far the Cavs toughest test, but which one of these teams should the Cavs want to face? Personally, I’m torn. Part of me wants to see them play both but here are some of the pros of rooting for each team in the Western Conference Finals.

Home court advantage in the NBA is a big deal. The Golden State Warriors and San Antonio Spurs were almost untouchable at home this season. The fans and energy can make a huge difference especially when the stakes are high. From giving the players some extra energy to feed off of or making so much noise that the opposing team has problems communicating, adding an extra home game off the start would be big for Cleveland. During the regular season the Cavs were 24-17 on the road compared to 33-8 at home.

The Oklahoma City Thunder is not as deep of a team compared to Golden State or Cleveland. While dealing with two of the top five MVP vote getters in Kevin Durant and Russell Westbrook is going to be a tough task, the rest of the team doesn’t pose as much of a threat. Serge Ibaka, Steven Adams, Andre Roberson, and Dion Waiters are not players that will scare the Cavs every night. If the team can stop Westbrook or Durant on any given night, the Thunder likely will not have enough fire power to overcome that loss of production and to match the Cavs dynamic offense.

The Cavs won both regular season matchups against the Thunder. They won the first meeting 104-100 on Dec. 17 in Cleveland, and 115-92 February 21 in Oklahoma City. The first game Kyrie didn’t play as he was returning from injury and the second one he only played nine minutes after the infamous bed bugs incident the night before. With Kyrie back in the lineup and the team playing the way it has, the Cavs should feel confident they can beat the Thunder whether in Cleveland or Oklahoma City.

Oklahoma City and Cleveland would draw much less attention than Golden State and Cleveland. ESPN is so infatuated with Steph Curry that he seems to be on the channel in some way every five minutes. The only players I heard more about were Johnny Manziel and Tim Tebow. Even today I turned on ESPN and they were talking about his wife’s fashion style. Seriously ESPN? A matchup with the Thunder would put the media attention back on Cleveland’s hunt for their first major sports title since the 1964 Browns instead of on Steph Curry made a trick shot from half court in pregame warmups. The sooner the Warriors media circus ends the better and the more attention the Cavs rightfully should get.

The satisfaction of coming back the following year after losing to Golden State in the Finals and beating them with a healthy team would be one of the best feelings a Cleveland fan can have. There is no love for Golden State in this town especially with the disrespect players like Draymond Green has for this team. To be able to say that the Cavs took down the Warriors in the Finals and got close but not close enough would feel better with the Warriors than any other team in the NBA.

· Beat the best.
While winning a Championship and beating OKC would feel amazing, the feeling of maybe not beating the best of the best may still linger. There is the argument that whoever comes out of the West is the best team and deservedly so, but the Warriors are a record setting team. Their 73-9 season is the best in NBA history and to not be the one to take them down in the playoffs may have a little bit of taint for some people. If the Cavs were to take down Golden State in the Finals, there would be no questions that in the end the Cavs were the best team in the NBA because they beat the best regular season team in the history of the sport.

Cleveland has always been the underdog in everything, commonly being known as the “Mistake on the Lake.” This should feed the current team even more because they love the underdog role. It seems like every time somebody takes a shot at LeBron with some kind of comment this postseason, he came out even stronger in the next game. Telling this team they can’t beat the Warriors should fuel their fire. They love the underdog role and it takes some pressure off of them and lets them play their kind of basketball and in Ty Lue’s favorite words, “Be aggressive.”

A Cavs Warriors rematch could become the most viewed Finals in the history of the NBA. I personally believe it would set records for viewership. Putting the Cavs in the biggest spotlight and beating the Warriors could bring even more fans to the city and build the reputation of the team as a true threat instead of as the team that couldn’t get the job done with LeBron hitting free agency. With the lights as bright as they can be, the city has a chance to shine and show what Cleveland is all about. The publicity and a Championship can go a long ways in rebuilding the reputation and attraction of downtown.

In the end I’m still torn on who to root for in the West. While I want to see OKC win because that should give us a better shot at winning the Championship the city has been waiting way too long for, I still want to stick it to Golden State. The image of Curry crying while chewing on his mouth guard as the Cavs celebrate their first NBA Title is pictured in my mind and would be the best dream come true. Either way, a Cavs championship means more to me than anything else.

Cavs Dunk Their Way to Dominant 115-84 Game 1 Win
Did Believeland Break the Curse?