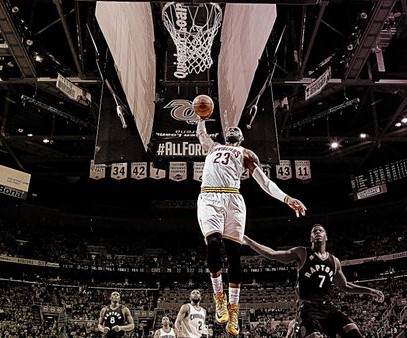 The Cavaliers dominated the Toronto Raptors in Game 1 of the Eastern Conference Finals on Tuesday night in Cleveland, cruising to a 115-84 victory.

Unlike recent games, the Cavs stayed away from the three-point shot for the most part, attacking the basket and scoring 56 points in the paint.

To say that some of those points came via two-handed jams would be an understatement.

Toronto was willing to live with the Cavs getting points in the paint, and the Cavs killed them for it.

LeBron James had a phenomenal night, making his first nine field goal attempts, a number of which were courtesy of dunks.

Here are some of the jams from Tuesday night’s slam dunk contest in Cleveland.

Toronto got out to a hot start, leading 17-11 early in the first quarter, but LeBron changed momentum with this dunk to get the crowd up on their feet.

LeBron continued to put on a show in the second quarter, throwing down this vicious jam, which was sure to get former-Raptor and Slam Dunk King Vince Carter up out of his seat wherever he was watching the game.

LeBron's NASTY SLAM from all of the angles!https://t.co/Zhu7P2BqxT

Near the end of the first half, Kyrie Irving dazzled his way to the rim and although it wasn’t a dunk, it was every bit as beautiful and equally as nasty.

Midway through the third quarter, Irving showed off his hops, throwing down a rare dunk, as the Cavs continued to pile on to their enormous lead over the visiting Raptors.

The very next Cavs’ possession, Irving found LeBron for what is known as a “high percentage shot.”

LeBron and Kyrie led the way for the Cavs, as Irving scored a game-high 27 points, while James put up 24 points on an efficient 11-of-13 shooting.

The Cavs return to action at home on Thursday night against the Raptors at 8:30 PM. Cleveland is seven wins away from an NBA championship.