Throwback: Nine Years Ago The Browns Buried the Patriots at First Energy Stadium 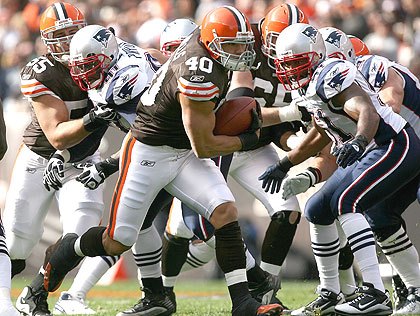 Yes those are the famous words at the start of the crawl for one of the most famous movies in history in ‘Star Wars,’ but today it also translates when thinking about the history between the Browns and the Patriots, and a game back in 2010 where shockingly the Browns dominated in a 34-14 win.

This wasn’t the Patriots in a lull either, they had entered the game with a mark of 6-1, while the Browns were plodding along under coach Eric Mangini, sitting at 2-5 for the November 7th affair.

Instead of Tom Brady and Belichick doing what they usually do against not-so-good teams and dominate, the Browns were the aggressor, running the ball right down the Browns throat.

The Browns ran for a whopping 230 yards on this bright sunny Sunday afternoon, holding the Pats to just 44 yards on the ground.

The big player for the Browns – former running back Peyton Hillis, the Madden Cover boy who (according to many) had the ‘Madden Curse’ shortly thereafter.

Hillis ran for 184 yards on 29 carries with two touchdowns. QB Colt McCoy threw for 174 yards, but he was careful with the ball, throwing 14-for-19 on the day.

As for Brady, he threw for 224 yards and two touchdowns, but on this day it was the Browns defense that running game that dominated.

Relive the fun that day down at First Energy Stadium with some highlights of the Browns stunning 20-point win.