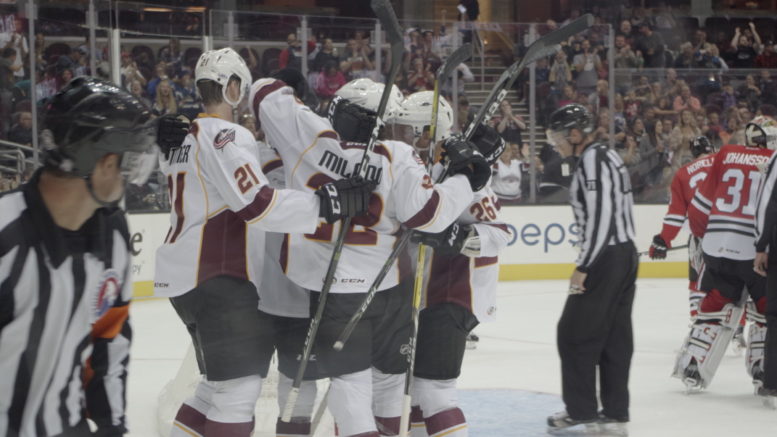 As the AHL All-Star Break reaches its conclusion, the players that joined forces for the sake of divisional pride will return to their home teams and gear up for the second half of the season. Some may be returning to a team that is cruising to the playoffs. Others may have a team that is already out of contention for the postseason. The rest have a shot of making the playoffs, but will have to turn it up for the remainder of the season.

The Monsters fall into the third category. Sitting at 20-17-1-3 this season, they are currently in fourth place in the Central Division and would miss the playoffs due to the AHL postseason format. Though just above .500 so far, Cleveland has done a good job at weathering the storm through what has been a crazy eight months.

For starters, they lost Head Coach Jared Bednar just a few weeks before the season when he signed with the NHL’s Colorado Avalanche. They then lost talented players such as Josh Anderson, Zach Werenski and Lukas Sedlak to the Columbus Blue Jackets after a tremendous season last year. Throw in adding a new head coach in John Madden and I’d say they’ve done an excellent job of working out the kinks.

As of today, the Monsters have 35 more games to lock up a playoff spot, so here are my three keys to a Monsters’ successful playoff push:

2. Find Consistency Among Scorers– The Monsters have one player in double digits for goals scored with Oliver Bjorkstrand. That is not a good formula for success, as we all know what diversity in scoring can lead to. Last season, the Monsters had eight players in double digits for goals scored, which led to a dangerous hand to deal with for the rest of the league. Having numerous players being able to score is a good thing, obviously. What it can do for a team is fantastic, as each line can contain one or two high-octane scorers. In order for the Monsters to become big players come April, the team will need a variety of players lighting up the goal horn.

3. Defend Home Ice– Cleveland sits at 12-8-1-1 at home, which isn’t too bad. Unfortunately, they are 8-9-0-2 on the road. With a lot of games coming up at The Q, it’s crucial that the Monsters rack up points in these homestands.

The Monsters take on the Iowa Wild tonight at The Q, their first game after the AHL All-Star Break. The road to the playoffs starts now.