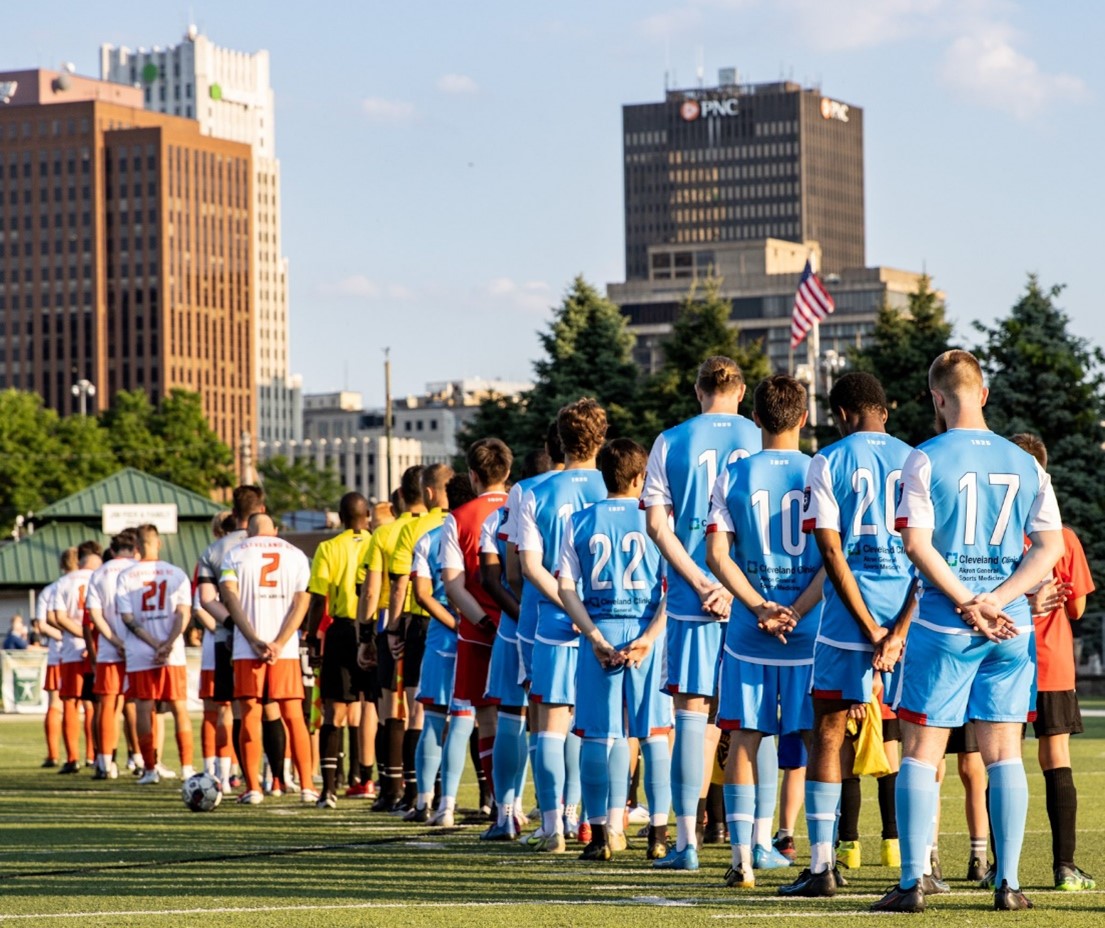 The squad that looks to take game 2 of our crosstown rivalry with ⁦@SoccerCLE⁩! pic.twitter.com/VJSoTvqd8S

On Wednesday evening in beautiful downtown Akron, Akron City FC and Cleveland SC played an NPSL soccer match that both teams sorely needed to win. Akron, ready to show that their solid play recently is a sign of great things for the young team, and Cleveland, ready to put aside their poor offensive showings the past few matches, both came into the game looking for three points. With all that looming over the two clubs, the rivalry game was sure to be intense.

But what began as VITAL turned into a rout as Cleveland shook off their offensive blues and won a lopsided 8-0 regular season game over their Interstate 77 southern neighbors. The win puts Cleveland back in the driver’s seat for first place in the NPSL’s Rust Belt conference. Akron finds themselves in fifth place. Andrew Nicholas had a hat trick, while the other five goals were tallied by Sam Harter, Chris Brennan, Admir Suljevic, Brock Pickett, and Jannis Schmidt. 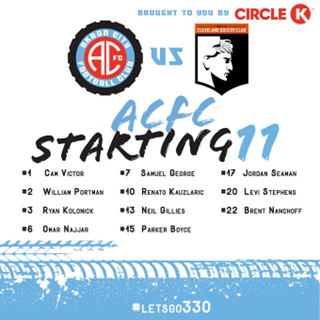 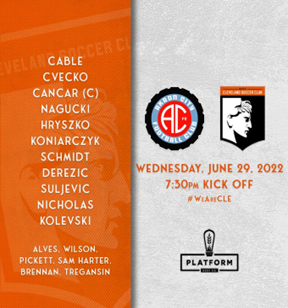 The last time these two teams met CSC put a 4-1 final into the books. But this game saw each side change their lineups from that first encounter. Wednesday, Akron had five different people start, namely goalkeep Cam Victor, defender Brent Nanchoff and Renato Kauzlaric in the midfield. Akron was excited to showcase the play of these new players, Nanchoff and Kauzlaric.  Somewhat surprising, Jaden Wright was not in the lineup to start for ACFC.

Cleveland also saw five new faces for this derby. Goalie Conor Cable was back between the posts after missing a few games while Jannis Schmidt (Midfield) made his first start for the club.

Cleveland, sporting their white tops and orange shorts, knew this game was too important to allow their opponent any early momentum. So, in the first thirty minutes they dominated play.

Cleveland started the first ten minutes with strong passes and good movement. In the first eight minutes CSC had three good looks at goal. The last was a series of passes from the newcomer Schmidt to fellow starter Andrew Nicholas. CSC Defender Ben Hryszko found Andrew’s pass, and his shot was strong but wide. 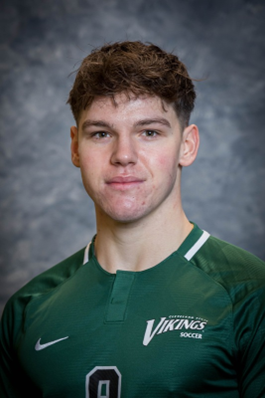 Jannis Schmidt was awarded a start for Cleveland…and the Cleveland State junior from Germany was outstanding! As was his teammate, Andrew Nicholas. Schmidt’s passing and vision opened many opportunities for the men from the LAND and his play led to the first of Nicholas’ three goals.

By dominating the possession, CSC gave ACFC almost zero touches. In the 11th minute Akron’s Sam George was called for a foul about four yards outside the ACFC box.  Admir Suljevic took the free kick and blasted it into the seven-man wall. The ball bounced back to him, and he lobbed the ball over the defense to Schmidt who took it down and slotted it past a diving Victor for the first goal and the lead, 1-0.

After the goal ACFC, sporting their royal blue tops with white sleeves and royal bottoms, began their first series of successful passes. But their first attack led by Nanchoff’s nice feed to a wide Neil Gillies saw the subsequent pass head into the box with no Akron player nearby.

Admir Suljevic, the crafty midfielder, had the ball at the 48-yard line. He took a quick look down the field and saw Cam Victor off his Akron line. The former Wickliffe High School graduate and former Mr. Ohio Division 3 in soccer sent a high ball that cleared the back-pedaling Victor and settled into the back of the net. That goal seemed to surprise everyone except Admir.

And then the flood gates opened from the 24th minute on.

Schmidt took the ball forward on the far side of the pitch. His beautifully lofted ball finds Suljevic in the box. Akron defender Jordan Seaman, Suljevic and Victor all collided after Suljevic got a touch on it. Nicholas jumped over the fallen players and pushed the ball in for a 3-0 lead. 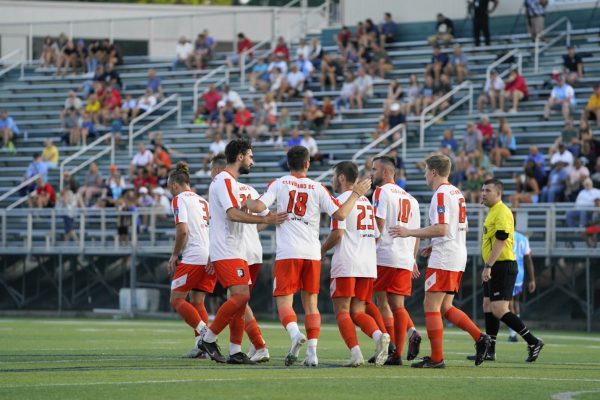 Akron kept pushing even though behind. They had two attempts around the 30th minute with Jordan Seaman taking the first attempt. His first shot from range went high and wide. The second was from a free kick. ACFC’s Kauzlaric played the free kick short, and some nice possession for a spell ended with a pass way off the mark and sent out of touch. 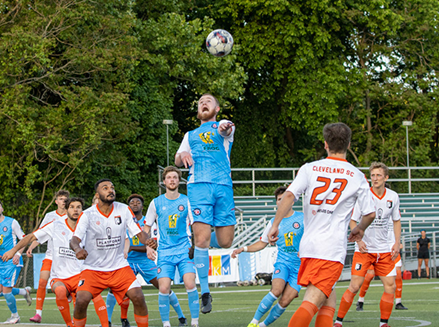 (Jordan Seaman heads it towards goal. Photo by Charles Murray)

Around the fortieth minute, Sam George went down with what appeared to be a hamstring issue. Jaden Wright quickly got into the fray only to see Cleveland almost land the fourth goal after Akron’s William Portman was shown a yellow card on a clearance. He appeared to hit Mikey Derezic in the shin while clearing a pass, although Portman claimed to the referee that Derezic feigned the contact.

Seaman for Akron is called for a foul deep in Cleveland territory. Cable booted it down into Akron’s box, where Gillies tried to chip it away. But Nicholas, who was more aggressive in his work on the pitch the entire game, took a sweet touch that lofted over Victor’s shoulder for the 4-0 lead and a great assist to the Cleveland goalkeeper! 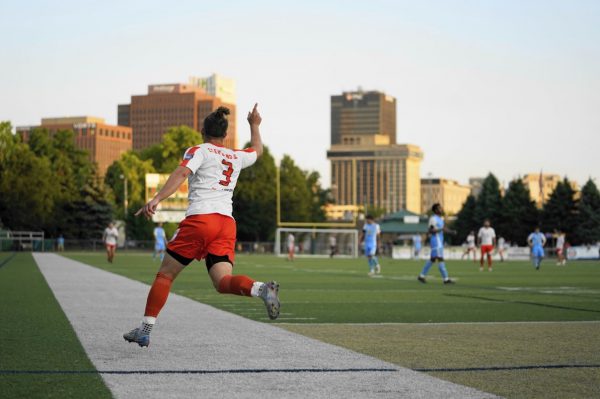 (Andrew Nicholas after the Cable assist, by Luigi Musto @viperg98)

Crossbar Challenge at half! 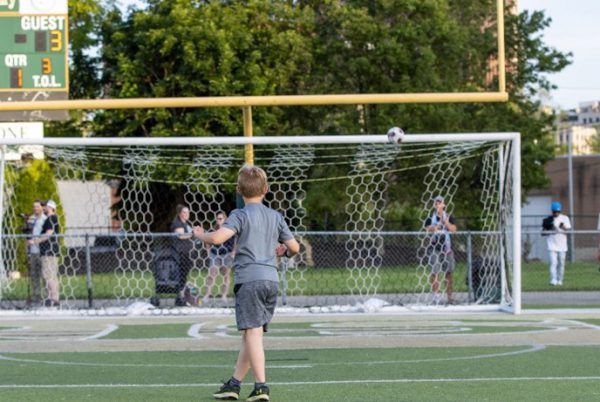 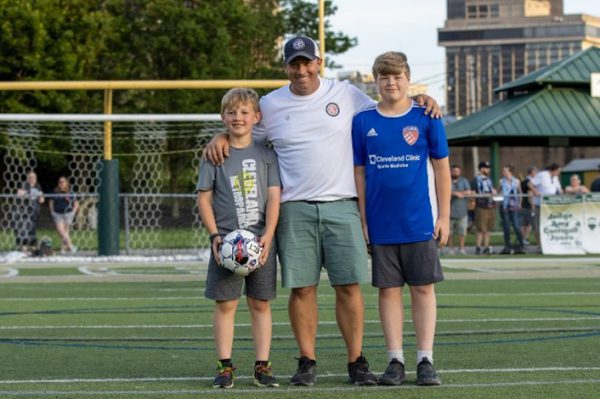 Cleveland was mostly content to just counter when they could. So, after a few changes for Akron at the start of the final 45, ACFC had their first corner at the 50th minute. The inswinger by Ryan Kolonick was headed by Jaden Wright and cleared weakly to Kauzlaric who shot quickly but somehow Hryszko’s foot sent it right. Nanchoff sent it back in and Jaden again headed it toward the center of the box. Akron continued to fire at Cable’s goal, but nothing found the net.

After the Akron sequence, Cleveland’s Schmidt again worked some magic. Grabbing a short pass, he takes a touch, moves into an open spot in the midfield, and dumps a beautifully weighted ball to Nicholas. Andrew lifted his shot from the left side of the box over Victor’s shoulder. The tough angled shot found the upper 90 on Cam’s far side for the 5-0 and cemented his hat trick with a gorgeous finish.

Akron had a few other chances namely in the 58th and 61st minutes but both were dealt with by CSC’s defense or Cable’s hands. 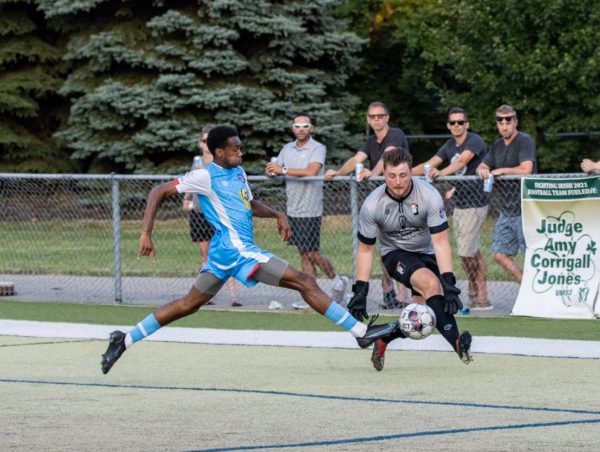 Cleveland Goal #6 and the Goal of the Match

In the 66th minute, Levi Stephens for Akron is shown his first yellow. Chris Brennan’s free kick over the seven-man wall was with pace and spin. It cleared the human wall, appeared to be headed to just over the top bar, but dipped amazingly in the upper left where Victor could do nothing at all.

William Portman was shown his second yellow of the match which resulted in the defenders first red card of the year. From there, Cleveland put on a clinic on how to pass and share. Brennan found Brock Pickett. Pickett gave a little back heel to Bojan Kolevski, who took it into the far-right side of the box and passed back to Brock who sent it into the twine.

The last goal again found Brennan a key member. Since Akron was doing all, they could to muster a goal, any misfire by them was met by a Cleveland counterattack. Brennan takes a pass wide and into the box outrunning all ACFC defenders. Taking his time, he passed back into space and found a hard charging Sam Harter for Cleveland who scored the final Cleveland goal against Akron’s Joseph Backhous, who came on as a substitute in goal for Victor who appeared to be injured early in the second half. 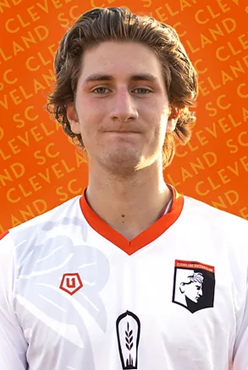 Cleveland rested their starters early in the second half and must have been thrilled with the play of the reserves. Granted, Akron was pressing high doing all they could for a goal…anything. But tonight, was not to be for the men from Summit County. 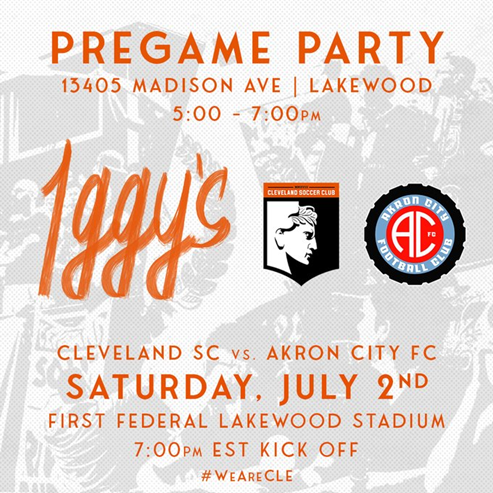 Both teams play again this Saturday at First Federal Lakewood Stadium, in Lakewood, Ohio. They are NOT at their home field in Berea. Match time is 7 PM EST. If your weekend activities need some soccer, these two clubs are sure to be entertaining! And we are taking suggestions for a name for this derby. Right now, we shall name this the I77 bash!

Cleveland has one final home game after their third derby with Akron. Then they finish the season on the road. Akron City FC will end the season with a home game against the Erie Commodores after a trip to Pittsburgh.