The History Of Ohio State Versus Notre Dame 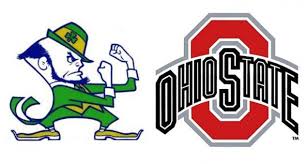 The BattleFrog Fiesta Bowl will be just the sixth time that Ohio State and Notre Dame have met in their long, storied histories.

Ohio State has won eight national championships, while Notre Dame has won 13, which is the second-most in FBS history, trailing Alabama by one.

The Ohio State Buckeyes’ football team played their first game in school history on May 3, 1890.

The Notre Dame Fighting Irish have been taking the field since 1887.

Hard to believe these two historic programs have only met five times prior to today. Let’s see if the Buckeyes can stay ahead in the rivalry, starting at 1 PM today on ESPN.