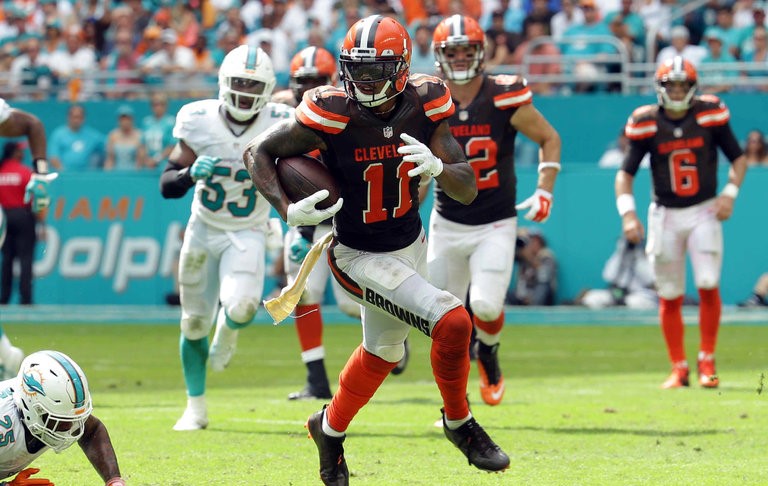 On Wednesday night Tom Withers of the Associated Press reported that Terrelle Pryor’s reps are continuing contract talks with the Cleveland Browns.

Earlier on during Wednesday, the Browns choose not to use a franchise tag on Pryor. Pryor had over 1,000-yards receiving in his first full season as a wide receiver. The Cleveland Browns are intending on meeting with Pryor’s agents at the NFL Combine to try and work out a long-term deal with the quarterback that turned wide receiver.

The Browns vice president of football operations Sashi Brown has said that the team sees Pryor as an important part of the team’s future.

Sashi Brown had this to say about Terrelle Pryor:

“We’ve had good conversations with Terrelle himself through the offseason, he and I have spoken a number of times. He and Hue Jackson have spoken. We do have some meetings set up with some representatives and we’ll see what happens there. We’re still looking forward to working toward finding some middle ground with Terrell to bring him back and have him as a Cleveland Brown for a long time.”

Pryor has stated that he would like to stay with the Browns. The Browns took a chance on the quarterback that turned wide receiver and so far the move has paid off.

Sashi Brown had this to say as the combine opened in Indianapolis:

“We’d like to have Terrell back and that’s a priority for us. That said, we’re not going to panic if he’s not back. But he’s a good player. He fits in our system, had a lot of success here with our coaches, so we think this is a great place for him to finish his career. We want to have him here long term as opposed to kind of a one-year temporary option. I think through my conversations, he understands. We value him a lot.”

Cleveland Browns NOT interested in Colin Kaepernick
Report: Browns Could Address Quarterback Position with No. 12 Pick