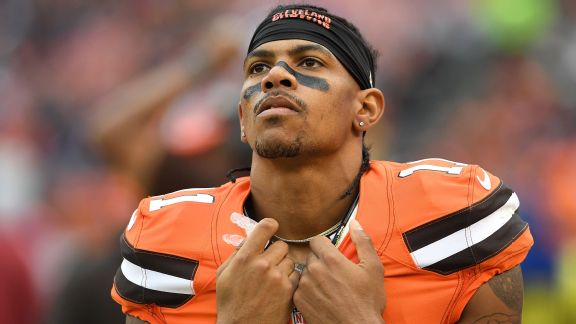 After Terrelle Pryor departed from the Cleveland Browns organization last offseason, Cleveland fans were understandably frustrated. Not only did they lose their best option at the position and a hometown guy, they lost him for less money. The Washington Redskins swooped in and signed Pryor to a one-year, seven million deal in the hope that he would cushion the blow their wide out core took. However, betting on himself did not pay off well for the former Ohio State quarterback and after a disappointing start to his 2017 campaign, the Washington wide receiver found himself on season-ending IR.

Now it appears Pryor is ready to come back to Cleveland to don the Brown and Orange.

Cleveland running back Duke Johnson Jr. posted an Instagram photo on Tuesday and Pryor took the liberty of congratulating Duke on a good season statistically. But that wasn’t all..

sooooo it certainly sounds like Terrelle Pryor wants to be back in Cleveland in 2018 ?? (h/t @B_Pegs) pic.twitter.com/dcbPT2nhiw

Yes, it sounds as if a Browns/Pryor reunion isn’t so far-fetched. Pryor is a free agent and it would be truly interesting if Washington decided to make the call to bring him back after a rather uninspiring showing for them. Pryor’s poor season could mean the Browns could get him for a discounted price and bolster their wide receiver unit in the process.

Then again, the Browns will have around 110-million dollars this offseason. Spending a little more to ensure the signing wouldn’t be the worst idea.

Cleveland Browns 0-16 Anthem by Grady Rains
Hate It, Love It, Ignore It – a Parade for a Browns Team that Won Zero Games Is Going to Happen