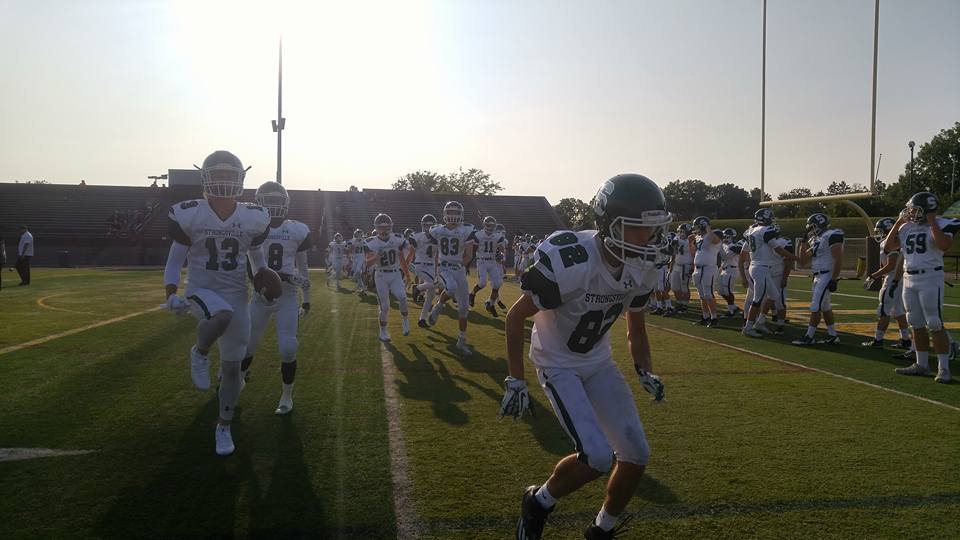 This game recap is brought to you by the fine people at Setta Trophy.

BEREA, Ohio –  Jony Major did it all early and often on Friday night as the Strongsville Mustangs traveled to Berea and took apart the Titans 48-34.  Major finished with 178 yards on the ground, rushing for 4 touchdowns.  He also passed for 176 yards on 9 of 13 passing with 2 touchdowns and an interception.  He had touchdown runs of 7,18,61 and 1 yards.

It also should be noted that the star wide receiver for the Mustangs, Joe Gillette, finished the game with 4 catches, 2 touchdowns and 153 yards.  He had an incredible average of 38 yards a catch.

Strongsville head coach Louis Cirino expressed his pleasure with the play of Major, but also things he will need to continue to do to be successful this season, “I want to see Jony continue to grow and show composure and be tough in multiple situations.  I’d also like to see what his arm strength is like and how is he going to respond when things get tough and how does he treat his teammates.”

Strongsville marched down the field in 9 plays on the opening drive to score on a QB draw from the 7-yard line, but missed the ensuing PAT to take a 6-0 lead.  Major was 3 of 3 on the drive for 57 yards with hookups of 21 and 16 yards to Joe Gillette.

Things would go from bad to worse for Berea Midpark as Omar Siggers fumbled the ball on the kickoff to give the ball right back to Major and the Mustang offense on the 22-yard line of the Titans.  Major would make them pay two plays later with an 18-yard touchdown run.

The Mustangs would then force a 3 and out to get the ball right back.  They wouldn’t waste much time as on a 3rd and long, it was Major hooking up with Gillette for an 81-yard touchdown strike to put the Mustangs up 21-0. 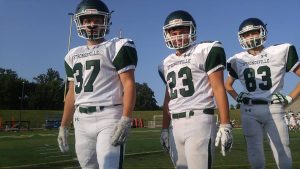 Just when it looked like it couldn’t get any worse for the Titans it did, as once again it was Siggers fumbling the kickoff, giving the ball back to Strongsville.   This time it would only take one play, a Jony Major to Gillette 35-yard touchdown pitch and catch to make it 28-0 with 4:30 still to go in the first quarter.  With just 10 minutes gone in the game, the Titans had only run 3 plays and were down 28 points.

The punishment would continue in the second quarter as Major and the Mustangs piled on.  This time it was major using his legs with a 61 yard touchdown run.  He broke several tackles and couldn’t be taken down. 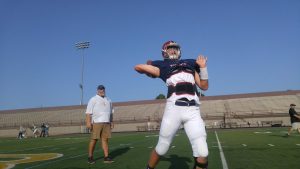 It was then that Trevor Bycznski would begin a furious second quarter rally.  Bycznski would lead two methodical drives to close out the quarter with back to back touchdowns for the Titans.  First, he hooked up with a 23-yard touchdown pass to Luis Vega to get them on the board.  Then on the next drive, taking it in himself from 4 yards out to make it 35-14 at the half.

A revived and suddenly hungry Titans team would come out to start the second half. Bycznski picked up where he left off and led Berea down the field with no issues for six more points.  This time it was Bryce Agnew taking it in from 4 yards out to draw the Titans within 15 points at 35-20.

Berea Midpark refused to cool off, and their defense came up huge, forcing a 3 and out to get the ball back to their suddenly red-hot offense.  Berea wasted no time, scoring their 26 and 27th straight points. 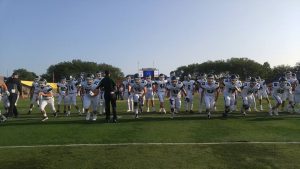 It was Bycznski using his legs, taking it in from 4 yards out to make it 35-27 after the successful kick.  The Titans had answered 35 straight Mustang points, with 27 of their own.  Bycznski would end up finishing the night completing 28 of 45 passes for 1 touchdown and 342 yards with no interceptions. 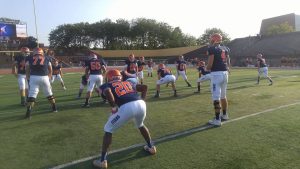 The Mustangs would soon cool off the Titan rally with yet another Major touchdown run, this time from 1 yard out on the next possession to bump the lead back up to 42-27.  Both teams would score one more time before it was over, giving Strongsville the 48-34 victory to open the season.