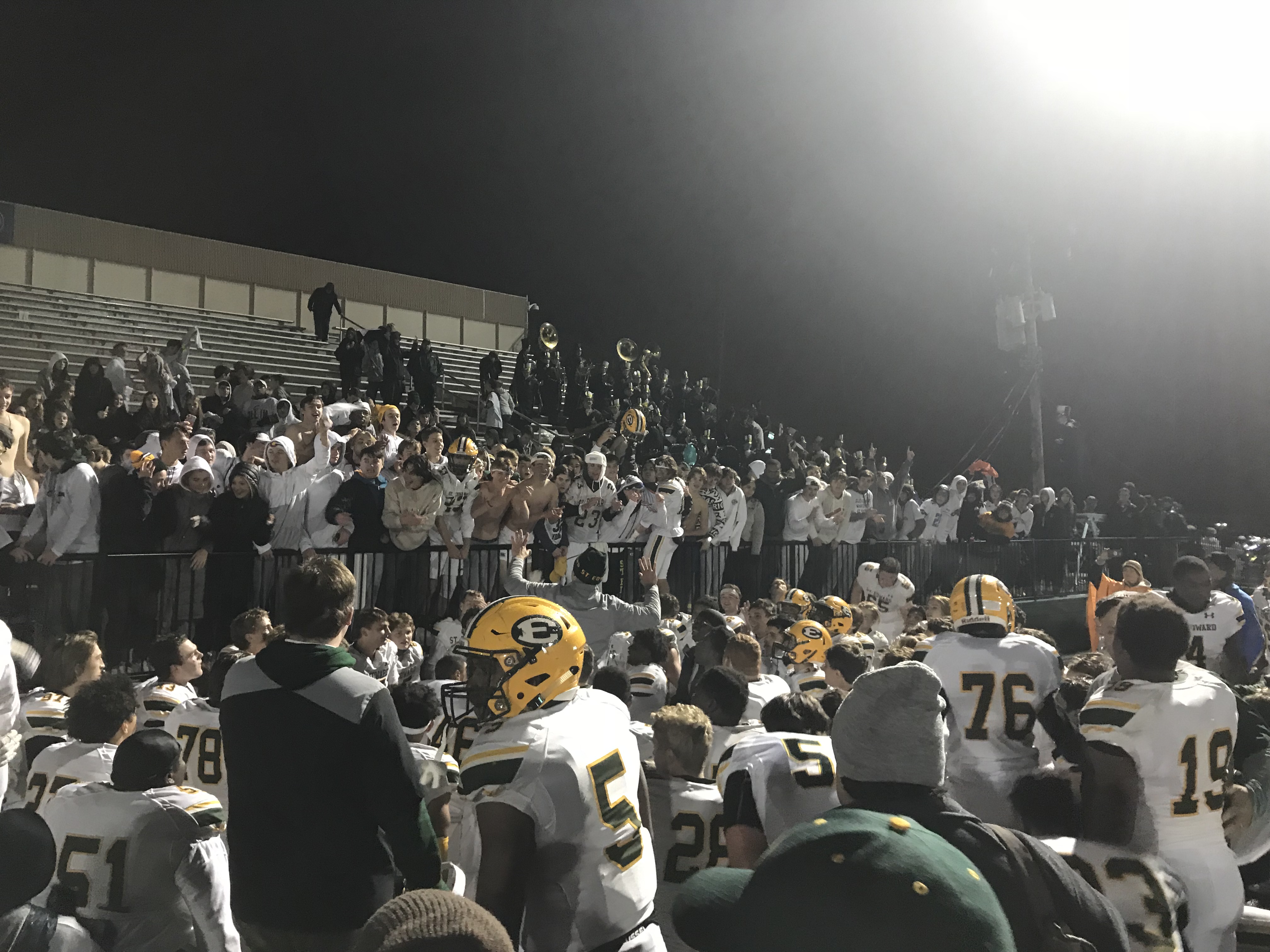 Parma, OHIO- Just a week ago, these two teams met to end the regular season and it was St. Ignatius that came out with the victory. This time, the St. Edward Eagles got revenge on the Wildcats, eliminating them from the playoffs after their 21-19 win Friday night.

Weather conditions in Parma on Friday night made things tough for both teams to get their offenses going throughout the game. The St. Edward defense held the Wildcats to just 253 total yards on the night, including one fumble recovery early in the first quarter that would eventually lead to their first score of the game.

The defensive effort from the Eagles was a very satisfying sight to see from head coach Tom Lombardo.

“It’s really satisfying because our kids played their hearts out,” he said.

Quarterback Garret Dzuro lead the Eagles in rushing during the win, but junior running back Joseph Formani filled in for Jordan Castleberry and ran for 65 yards on 15 carries and two touchdowns.

Dzuro enjoyed a very successful night after taking a series of hard hits all throughout the game. The senior signal caller completed 9 of 14 passes for 156 yards through the air while running for a team-high 101 yards on 28 carries while scoring one touchdown.

“He’s the heart and soul of what we do,” coach Lombardo said. “The kid is our team leader and he’s tough as nails. He runs our offense and like I said, he can beat you running and he can beat you throwing.”

St. Edward enjoyed an early 7-0 lead after Formani found the end zone to open up the scoring. As the second quarter was winding down for the Wildcats, quarterback Patrick Delahunty connected with senior wide receiver Jack Kennedy to tie the game up at seven apiece heading into halftime.

As the rain began to slow down to start the second half, both teams would open up the scoring with two quick scores. On the opening drive, it took the Eagles just over one minute to regain their lead from the first half.

The Eagles pushed their lead to 21-13 following a two-yard touchdown run from Garret Dzuro. Down by eight points, St. Ignatius was forced to travel 99 yards to try and force a tie with under four minutes left in the game. A couple of long plays by the Wildcats did just that, ending the drive with a 35-yard touchdown run from Patrick Delahunty.

St. Ignatius, now down two with under two minutes left, was faced with a two-point conversion to try and tie the game. Delahunty had trouble finding an open receiver, resulting in a quarterback sack. The 21-19 score at the time would end up being the final score, advancing the Eagles to the Regional Semifinals.

With Euclid securing a 35-0 shutout win against Austintown-Fitch, coach Lombardo knows that a matchup against the Panthers this upcoming week will not be an easy task.

“We have to enjoy this for the moment,” he said. “Then we got to get back to work just like we’ve been doing all year long because Euclid is as good as ever.”

NEO Sports Insiders thrives on our relationship with many fine sponsors all over Northeast Ohio. We are currently in search of winter sports sponsors. Please contact Vince McKee with any small business you feel would benefit from the massive exposure we can give them, Vince can be contacted at coachvin14@yahoo.com