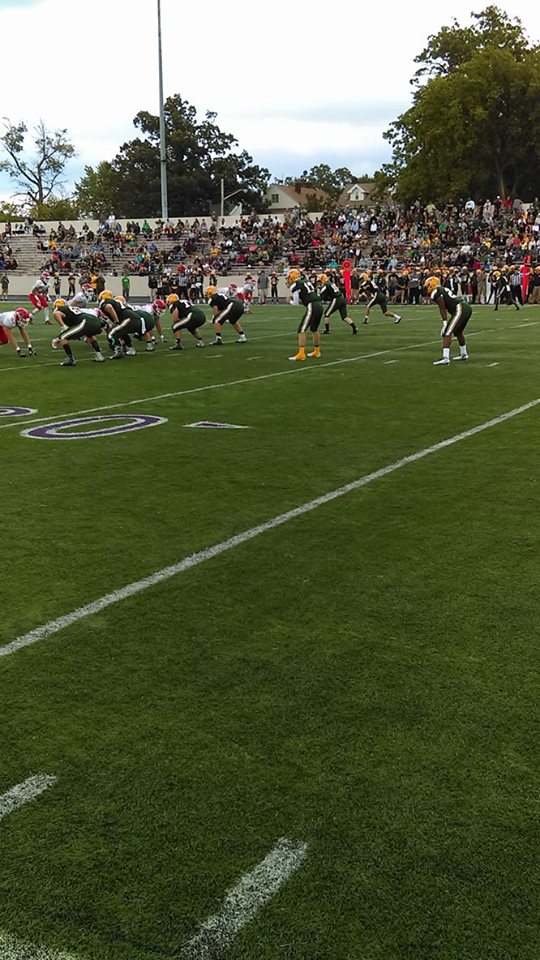 This game between the St. Edward Eagles and the Naperville Central Redhawks is sponsored by Mullins Construction .

LAKEWOOD– The 4-1 St. Edward Eagles took on the 3-2 Naperville Central Redhawks (IL) this afternoon at First Federal Lakewood Stadium. This was the Eagles Homecoming Game.

In the first quarter of the game it was tightly contested until the 1:18 mark in the beginning quarter when Eagles quarterback, Kevin Kramer ran for a 7 yard touchdown run to give the Eagles the early 7-0 lead over the Redhawks. That was the only scoring play in the first quarter.

In the second quarter, Naperville quarterback, Patrick Ryan connected with wide receiver Joshua Boomgarden for a 47 yard touchdown reception to tie the game at 7. During the kickoff following the score for the Redhawks, the kicking team kicked a pooch kick that was recovered by the Redhawks at the St. Edward 30 yard line. The Redhawks looked to be threatening after recovering the ball , but was almost immediately stopped when senior , DeShane Bloodworth intercepted a Ryan pass at the 1 yard line stopping Naperville Central from scoring. Nothing major happened following that play and the Eagles and Redhawks were tied at 7 to end the first half.

In the third quarter, St. Edward scored with 8:44 left when they established a trick play that involved sophomore quarterback Garrett Dzuro threw a pass to normal starting quarterback, Kramer which gave the Eagles a 14-7 lead . Within 20 seconds after that score, the Redhawks were on offense but Ryan was picked off by Kevin Dever, who returned the interception for a 23 yard touchdown return. Bloodworth had his 3rd interception of the game with 6:08 left in the third. Lavar Archibald of Naperville Central left the game on a stretcher with an apparent ankle injury.  To end the third quarter, Eagles wide out, Masen McManamon had a 47 yard touchdown run to finish off the quarter. The Eagles ended the third quarter scoring 21 unanswered points.

Early in the fourth quarter, the Eagles put on the finishing touches to their victory when Damerisse Freeman caught a 10 yard pass from Kramer for a touchdown , which gave St. Edward a 35-7 lead. When Kramer threw the touchdown pass, he established something very unique and unusual , he had a touchdown reception, a rushing TD, and a passing TD. The Redhawks did score once again with 6:49 left in the game when Ryan completed a pass to Tommy Coyne for a touchdown pass of 20 yards, but it was a case of too little too late. The St. Edward Eagles had 28 unanswered points until that score from Naperville Central. The Eagles emerged victorious in the end with a 35-14 victory. The St. Edward Eagles improved to 5-1 on the season and Naperville Central fell to 3-3 on the season.

DeShane Bloodworth had this to say on his 3 interception game this afternoon:

“It wasn’t expected but we have great defensive lineman and linebackers that are putting pressure on the opposing team and rushing the quarterback, it makes it easier on me.”

Kevin Kramer comments on having a receiving , rushing , and passing touchdown in a single game:

“I’ve never done that before, we practice it all week at practice, I just was hoping for a chance to run it in a game.  After a couple times of running the jet sweep , I told coach that nobody was following me out there. Coach told me to give it a shot. Garrett threw a beautiful pass.”