Sloppy ending haunts Charge as they fall to Westchester Knicks 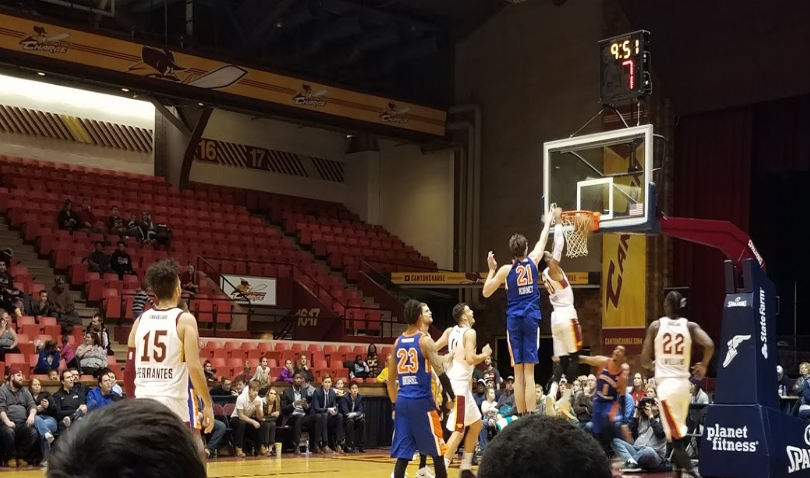 CANTON, OHIO– NBA G League games are made up of four quarters, each quarter being 12 minutes. So usually over the course of 48 minutes, teams can afford a few mental lapses, unless that lapse happens in the final minutes of the game. Unfortunately for Canton Charge fans on Friday night, they witnessed a bad few minutes resulting in a 95-90 loss against the Atlantic Division leading Westchester Knicks.

This game was decided in the final 1:54 or more specifically six possessions. Had this string of possessions played out differently, the result probably would’ve gone differently for the wine and gold. The first possession came out of a timeout and most would hope coach Nate Reinking drew something up for an easy bucket late in the game. Unfortunately, things never got to play out as Marcus Thornton turned the ball over out of bounds.

The next Charge possession started much like a lot of possessions do, a high screen for Canton guard London Perrantes. As Perrantes dribbled over to the right wing, Charge center Caleb Swanigan pops to the top of the key, the ball was swung and quickly shot by Swanigan. While it was not a bad shot, it was shot so early in the shot clock that a top of the key three by a guy who hadn’t shot a three all game turned out to be a wasted possession. The Knicks quickly passed the ball up the floor to Nigel Hayes who nailed the corner three.

Still having a chance to win the game with just under a minute left, all the Charge need is a bucket. And as Perranttes brought the ball across half-court he sees an open teammate but Knicks guard Xavier Rathan-Mayes jumped the passing lane and picked off the pass and quickly advanced the ball up the court to former North Carolina standout Isaiah Hicks for a short jumper.

Another timeout by Canton results in another forced three-pointer by a guy who hadn’t shot a three all night. At this point Canton was forced to begin playing the foul game, they got lucky on the first one as they got the ball back still only trailing by six. Kevin Olekiabe nails a three to cut it back to a three point game.

As chants of OH-IO echoed throughout the arena former Michigan standout Trey Burke stepped to the line and knocked down two free throws.

Fresh off hitting a three-pointer the ball once again found itself in the hands of Olekiabe, this time things ended much differently as he turned the ball over without Canton getting off a shot.

Tonight’s loss marked the seventh loss for the Charge in nine games. The last two losses have come against division leaders and a combined seven points. So while the Charge are competing, they are struggling to finish the job. Despite blowing an 18 point halftime lead the other night against the Wisconsin Herd, then tonight wasting your final possessions in a game many thought you had won, coach Nate Reinking has had continues preaching to his team that you “have to believe and make a play.”

While the end of the game was the story people will remember from Friday night, the play of Marcus Thornton in the second half deserves to be recognized. Thornton hit five threes in the third quarter tocarry the Charge offense. Thornton was quite early only scoring five of his 27 in the first half.

The first half was controlled by the big men as Caleb Swanigan, Ante Zizic and JaCorey Williams combined for 30 of the Charges 43 points. These three only combined for 15 points in the second half as the Canton offense shifted from the bigs. Swanigan continued his G-League domination as he had his third double double (16 pts, 19 rebounds) in just four games.

The Charge travel to Michigan tonight to take on the Grand Rapids Drive tomorrow in the third meeting between the teams this season, Canton owns a 2-0 record vs the Drive this season. Cantons next home game is January 10th versus the Iowa Wolves who currently lead the Midwest division.