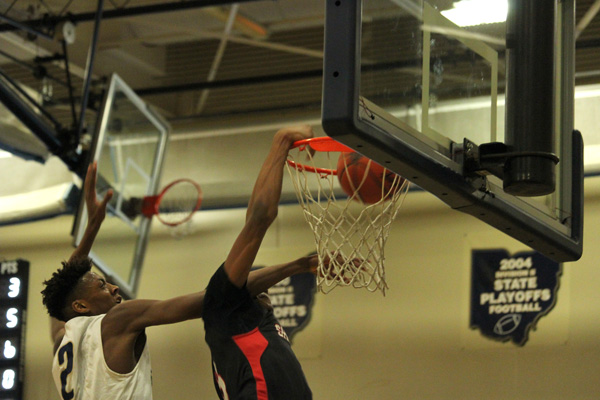 ELYRIA, OHIO– At game time, the outside temperature was five degrees, but the Elyria gymnasium turned out to be plenty warm enough on Friday night. The host Pioneers broke out to an early 7-2 lead and stretched the margin to 15-6 on a layup by senior guard Roman Carter midway through the first period. But that would turn out to be Elyria’s largest lead as Shaker Heights closed out the quarter on a 9-2 run. Following a buzzer-beating 3-pointer by senior guard Justin Phillips, Shaker Heights trailed by just two (17-15) after one quarter.

The Red Raiders turned up the heat even more in quarter two, forcing eight Elyria turnovers in the period and outscoring the Pioneers by a 28-17 count. Phillips led the way for Shaker Heights with 13 points in the quarter including another last-shot 3-pointer that tickled the twine as the halftime buzzer sounded.

After trailing 43-34 at the intermission, Elyria came out strong in the third period behind hot shooting from the guard combo of Roman Carter and Caleb Rogers who combined for 16 points in the quarter. Senior forward Justin Koepp helped the Pioneers get back in the game by grabbing five of his game-high 13 rebounds as Elyria closed the gap to 57-53 after three.

Shaker Heights maintained a slight lead throughout most of the fourth quarter. And when Elyria senior forward Deviian Williams fouled out with 3:39 to play, it looked like Shaker might be able to coast home. Williams played a key role with a double double (10 points & 10 rebounds) for the Pioneers.

Then the game took a strange turn. With Shaker Heights leading 65-60, a technical foul was called on the Red Raiders’ Christian Guess on one end of the court as the Pioneers’ Carter was draining a 3-pointer on the other end. After sinking one of the two free throws awarded for the technical, Elyria was back to within one at 65-64. On the inbound play after the technical, the Pioneers worked the ball inside to Koepp who gave Elyria the lead 66-65 with a short floater at the 2:39 mark.

From that point on, Shaker Heights outscored Elyria 8-2 to go home a 73-68 winner and improve their season record to 6-1. With the loss, the Pioneers fall to 6-3.

The Red Raiders were paced in the scoring column by senior guard Dale Bonner with 21 points. Guess finished with 20 points, and Phillips added 16. Shaker Heights made eight out of nine free throws in the fourth quarter and 11 out of 14 for the game. The Red Raiders forced Elyria into 17 turnovers while only committing seven of their own.

For the Pioneers, Carter nailed seven 3-pointers and finished as the game’s leading scorer with 29 points. Koepp tallied 16 points to go with his 13 rebounds. Overall, Elyria had a 32-25 rebounding edge for the game.