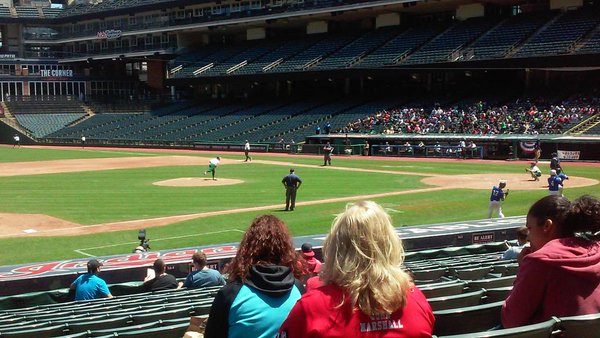 CLEVELAND – It was a beautiful day at Progressive Field and it was also a beautiful day for the best two teams in the Senate Athletic League to do battle for the Championship.

The Rhodes Rams and the John Hay Hornets took the field at 12:30 and from there, the action began. The Hornets started off very sluggish, with no offensive production for most of the game. For Rhodes, the offense was clicking all day.

Scoring five runs in the first three innings, the Rams never looked back. Starting Pitcher Carlos Vazquez shut down the Hornets, allowing just one run in the game.

When the Hornets scored their first run in the fifth inning, it looked better for the Hornets chances going later into the game. The tide didn’t turn, as the Rams scored once again. As the innings went on, it looked like the Rams were already seeing the Senate Athletic Championship for back-to-back titles.

Coming into the final inning, the Rhodes’ fans got excited, knowing their team was so close to the championship gold. Their excitement was not in vain, as the Rams clinched the title and celebrated on the Progressive Field, which is the grandest stage of high school baseball for the SAL.

I spoke with both coaches after the game.