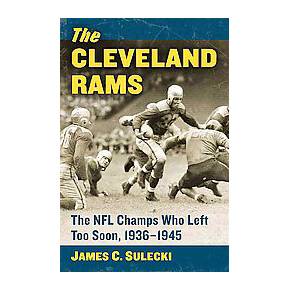 It wasn’t too long ago (1995) that the Cleveland Browns left Cleveland as Owner Arthur Modell took the money and ran to Baltimore.  A city that would see the renamed “Ravens” win two NFL Championships. At the time of the move the Browns were a contender and fresh off of a playoff run, fans had hope for the franchise and the future seemed good.

As painful as that was, it could have always been worse.  Can you imagine losing an NFL franchise right after they won the League Championship?  It happened, and to Cleveland as a matter of fact in 1945.

I had the pleasure of writing about the 1945 Cleveland Rams in my book Cleveland’s Finest, although I only wrote one or two pages about them, author James Sulecki has taken things even deeper and has written an outstanding book all about the championship winning team.

The book is titled “The Cleveland Rams: The NFL Champs Who Left Too Soon”.  The Rams were in Cleveland from 1936-1945.  Winning a title, the year they left in 1945.  Exactly 50years later it would all happen again with the Browns, less the title.

The story explains how the Rams went from a homegrown Ohio team funded by local businessmen to the first major-league franchise on the West Coast after moving to Los Angeles.  Their departure would jump start a chain of events in Cleveland that continuesto this day.

The book doesn’t leave a stone unturned with extensive research being done.  Sulecki doesn’t miss anything and pulls no punches when it comes to comparing Rams owner Dan Reeves to Art Model.  I had the pleasure of listening to Sulecki speak at Parma library last week, and his knowledge of the Rams is excellent!

The book walks you through every step of the entire franchise with full detail.  It gives you an excellent blow by blow recap of the 1945 Championship game against the Washington Redskins as well.  A game the Rams won 15-13 against the legendary Sammy Baugh.

If you want to learn about history, football and just hear a fascinating story, this book is for you!  The book is available on Amazon at the below link.