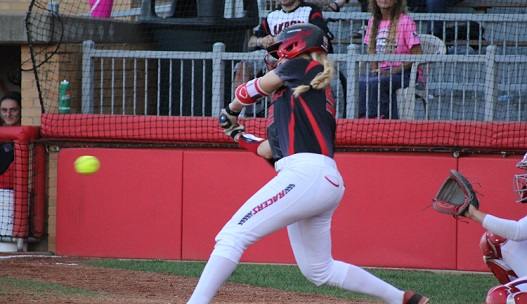 The Racers returned home after being on the road to play the USSSA Pride at their home field, Firestone Stadium in Akron, Ohio. “It’s like a breath of fresh air to come back to a home crowd.” Said Alexis Silkwood.

While the score was 5-3, the Akron Racers put up a good fight.

In the top of the first inning the USSSA Pride was able to put up 2 runs against starting pitcher, Megan Betsa. Megan Wiggins was the first run of the game after she stole home on a wild pitch off of Betsa. Wiggins was followed by Kelly Kretschman who was brought in by Kristi Merritt.

The Racers put up a run in the bottom of the first inning. With A.J. Andrews on first after being hit by a wild pitch, she was moved around with a bunt from Ashley Thomas, a hit from Sami Fagan, and finally brought in by Shellie Robinson with a single.

In the top of the second inning Gionna DiSalvatore was able to put up another run for the Pride. She was scored by Sierra Joy Romero with a single.

The Racers were unable to put up any runs in the bottom of the second to leave the score 3-1 until the top of the forth.

In the bottom of the sixth inning the Racers were able to put up two runs with a homerun from Sam Fischer that plated Shellie Robinson, bringing the score to 4-3.

The Pride was able to put up another run in the top of the seventh with a solo homerun by Shelby Pendley.

The Racers were unable to put up the necessary runs to get the victory.

”I have so much respect for her and her resiliency, and she’s a bulldog and she shows it.” Is what Charlotte Morgan said about closing pitcher, Alexis Silkwood.

While Megan Betsa started the game, Alexis Silkwood closed to last 5 and a half innings. Betsa was being hit off of from the start and that helped set the stage for Silkwood.

While Betsa attacks the zone, Silkwood pitches around the zone with a lot of movement. Betsa had two runs scored on her, Silkwood three. “I had a hard time finding the strikezone and attacking the zone.” Said Betsa about her performance.

“To go out there and just compete, the staff has to have our backs, everyone has our backs….being able to lean on each other.” Said Silkwood about her performance on the mound.