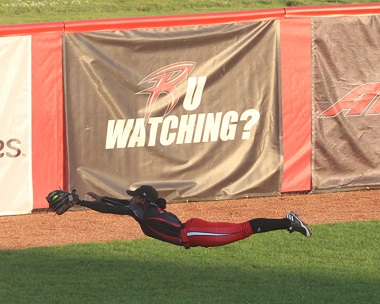 The Akron Racers won both games of a double header against the Texas charge. The Racers won their first game of the day, 3-1. Then the Racers followed it up with a 1-0 shutout.

“Energy is contagious” Charlotte Morgan, about her team’s energy on and off the field, which was apparent to anyone watching.

“They came out and they were actually the Racers today, the dugout was hyped and it really starts with that.” Stated Morgan about the moral of the team.

In game one of the double header, the Racers were able to put up a run in the bottom of the second with a homerun from Shellie Robinson. “We were just trying to play the game our way, the Racer way.” she said.

The Racers added two more runs in the bottom of the sixth. Ashley Thomas was able to beat out a bunt single. Sami Fagan then brought Thomas in to score.

With Fagan in scoring position, Sara Groenewegen moved Fagan to third with a single. Nicole Schroeder drove Fagan home to take a three-run lead on the Charge as the Racers entered the top of the seventh.

Lauren Haeger hit a solo homer over the fence to start off the Charge in the top of the seventh inning, but Texas was quickly shut down by Groenewegen with three up and three down after that.

Sara Groenewegen was the winning pitcher in the first game. She had three strike outs and allowed one run on two hits in the complete game victory.

Groenewegen had a game plan to keep the ball in the park, which was accomplished minus the solo homer in the seventh. “The whole game, I have the same mind set, to get the team back in the dugout to score, I don’t think at any point of the game it changed, but when we got three runs, it kind of added to my confidence.” Groenewegen stated.

In game two the Racers were able to hold onto a 1-0 shutout, thanks to great pitching and amazing defense.

It was a scoreless tie through the midway point of the game, until Ashley Thomas homered in the bottom of the fourth, scoring what would prove to be the only run of the game.

Racers center field, A.J. Andrews made a game-saving catch with runners on first and third with two outs.

Andrews had a diving and snagging a line drive into the gap in center field, preventing the runners from scoring.

Jailyn Ford started in the circle for the Racers and earned the win. She shared the mound with Alexis Silkwood.

Ford pitched the first five innings and Silkwood closed it out to combine for the shutout. Ford allowed two hits and struck out one, Silkwood had two strikeouts in two perfect innings to earn the save.

All three pitchers led the way in both games on the mound, as the Racers outscored Texas 4-1 in two games.

“It’s not really about my performance, its about defense…they had a lot of great plays….I know that I can rely on them and they have my back.” Ford said about her time on the mound and the trust she has with her team.

She was aggressive and made plays that could have been do or die for the Racers.

Even though they came out of the game with a loss, she never stopped and kept her and her teammates focused and energized no matter the score.

The Charge went all the way through their lineup in the top of the second inning, scoring six more runs.

The Racers were unable to get anything going against Haeger early in the game.

Texas led, 10-0, heading into the bottom of fourth, when the Racers were able to put two runs up on the board with a two-run shot by Nicole Schroeder.

In the bottom of the fifth, Gilbert hit a two-run homer to make it an 11-4 game.

The Racers tried to get a rally going in the bottom Maddy Grimm and Schroeder each homered, but Akron was outslugged by the Charge in the series finale.

The Racers went through three pitchers and Fico took the loss, as the Charge were quick to time her up.

“I need to come out and do a better job to give my team a better chance to win.” Fico said about her performance on the mound Sunday.

Alexis Silkwood worked an inning in relief. The Racers then went to Laura Winter who finished off the game.

“I think we needed to start strong in the circle, giving up a run or two runs, that’s fine, but when you have a big inning you let six runs and it kinda gets out of hand in the second.” Charlotte Morgan said after the loss.

Despite the rare rough loss at home, the Racers really turned their early season struggles on the road around with a fantastic 7-3 stretch over the 10-game homestand, their first of the year.

Akron (11-10) will quickly travel to Chicago to take on the Bandits on Monday and Tuesday.

Both games in Chicago will be streamed on NPF TV. Akron will return home to face the Bandits for a two-game series beginning on Friday, July 8 with first pitch scheduled for 7:05 p.m. For ticket information contact the Racers box office at 330-376-8188 or visit the team’s website at www.akronracers.org.