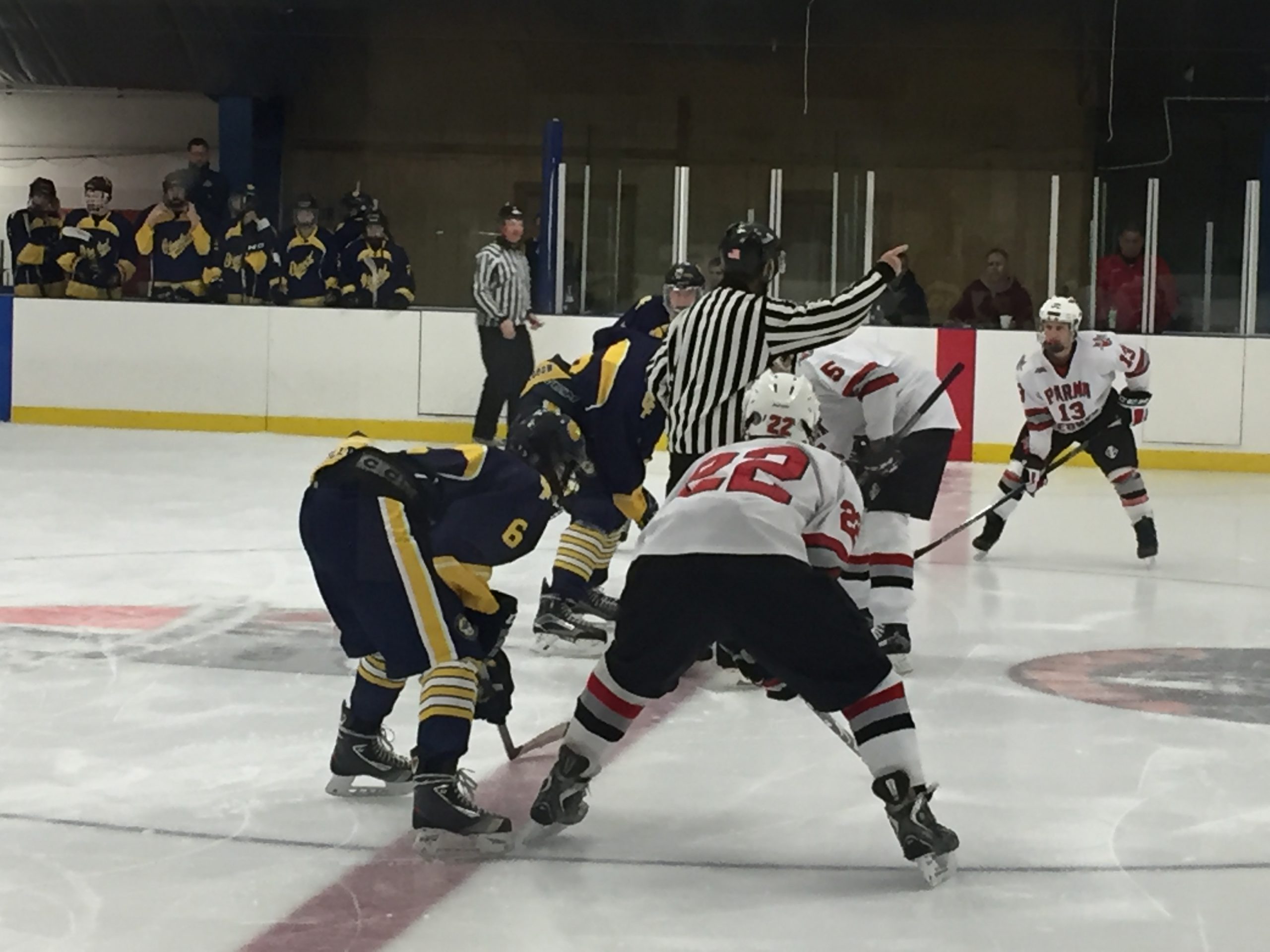 PARMA, OHIO – Parma Redmen goalie Ryan Pinson had a stellar effort in goal Tuesday night for his squad, as the Redmen pulled off a solid 4-1 victory in their league opener over the Olmsted Falls Bulldogs at Michael A Ries Ice Rink.

Parma playing in their first game in the White Division, showed off not only a great effort from Pinson, but also made the most of their offense, as they were outshot 38-17 but still got the victory.

The Redmen also killed five of six power play by the Bulldogs, as they did an excellent job keeping the puck out of the net.

The Bulldogs will look back at the loss and regret all the chances and near misses, as they outshot Parma in all three periods, and early on held an 8-0 advantage in shots on goal before Parma even recorded a shot on net.

After the Redmen were able to handle the early Bulldog onslaught, they were able to get the first goal of the match, as sophomore defender Matt Piech found the back of the net on Olmsted Falls goalie Zach Snyder to make it 1-0 with 3:13 left in the opening period.

The goal seemed to calm Parma down, and gave them momentum as they ended the first 15 minutes with the one goal lead, despite the Bulldogs 13-6 edge in shots on net.

The second period was defensive on both sides, and the officials whistles blew often, as there was a total of eight penalties called, four minutes on the Bulldogs and 14 on the Redmen.

It was Parma though taking advantage of one of their power play chances in the second, as freshmen defender Robbie Gudin recorded a power play goal to make it 2-0 with 2:19 left in the second.

Senior Joey Gallo and Piech each got assists on the Gudin goal that gave Parma the two-goal edge after two periods.

Olmsted Falls came out in the third period quickly, as senior forward Cam Wilson got the Bulldogs to within 2-1 on a power play goal to get them back in the game just :42 seconds into the final period.

Defender Jacob Kerkay got the assist on the Wilson goal. The Bulldogs continued their assault on the net, but time after time Pinson was able to turn them away.

The Redmen put the game away as Piech scored his second goal of the night with 7:27 to play to give Parma a 3-1 lead. Freshmen forward Matt Higginbotham and Gudin got the assists for the key goal.

Gallo finished off the impressive Parma win with an empty net goal with two seconds left to make it a 4-1 game, with forward David Basic getting the assist.

The Bulldogs will look to get back on track Sunday in Brooklyn as they host Westlake at 4:15pm. Parma is back on the ice vs Bay on Sunday at Serpentini Ice Rink at 5:30pm

Click Page 2 to See More Pictures From the Battle Between the Redmen and Bulldogs!