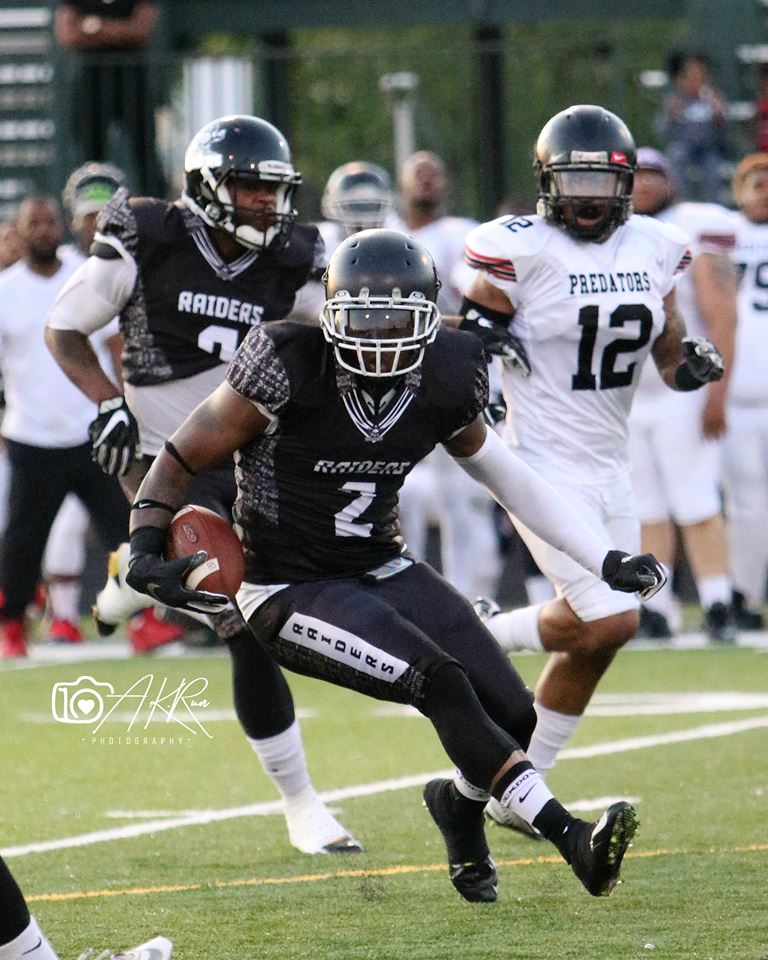 MEDINA, OH – Two teams who hang their hat on their defenses engaged in a slugfest on Saturday night in Medina as the Ohio Raiders handed the Northeast Ohio Predators their first loss of the season 7-6.

Punts and turnover on downs were the ending to every single drive but one in the first half. As games often do, this one came down to one big play for the Raiders to take what would ultimately be the only lead they would need on the evening.

Punter Ryan Young’s punt with time winding down in the second quarter faded Ohio returner Rapheal Hurd back to his own 40 yard line, and it was there that the player affectionately known as “Turtle” worked his magic. Weaving in and out of Predators defenders, Hurd scampered his way down the right sideline and into the endzone for a 60 yard touchdown return to give his squad a 6-0 advantage at the break. Josh Brebrant’s extra point put the home squad on top 7-0 after two periods of play and sent each team to their respective locker rooms.

Offensive futility was again the way of the early portion of the second half as each teams defensive unit forced the other to punt away the football in the games third stanza.

Moments after missing a kick from 42 yards and seeing their kicker hit with a penalty, the Raiders looked to up the score to 10-0 but were unsuccessful as Brebant missed from 53 yards away and gave the NEO great field positioning to start their next drive.

With the ballgame wrought with emotion thanks to players who had been on the opposite sideline in previous years the fans in attendance were treated to a hard hitting contest until the end.

Just in front of the two-minute warning the Predators rushed into the endzone for the first time on the evening to come within a point as QB Ryan Young perfectly executed a zone read option for a touchdown. Unfortunately for the Predators however Young’s jaunt on the two-point conversion attempt was not as successful and he was stopped short of the goal line to keep the score 7-6 Ohio.

Thanks to their opponents having no timeouts in their possession the Raiders were able to run out the remaining nearly two minutes on the clock and secure a home victory.

Ohio improves their overall record to 5-2 and forces a three way tie in the PAFL with a 4-1 mark that is shared by both the Predators (5-1 overall), and the WPA Wildcatz who were handed their only conference loss by NEO.

Next week the Predators will return home to Euclid High School for a 5pm battle against the Pittsburgh Saints while the Raiders will travel to Copley, Ohio to take on the Northeast Ohio Silverbacks at 7pm in a game broadcast live on the Ohio Raiders Football Network.

Offensively the Raiders were led by Hurd who connected on 3/11 passes for 67 yards and rushed for 48 on 12 carries. NEO signal caller Ryan Young ended the night 6/18 for 112 yards. Terrence Brown led all rushers in the game with 14 carries for 72 yards as well as a 45 yard punt return that nearly gave his team a first half go-ahead score.

Article Content from Michael Hirn of the Ohio Raiders