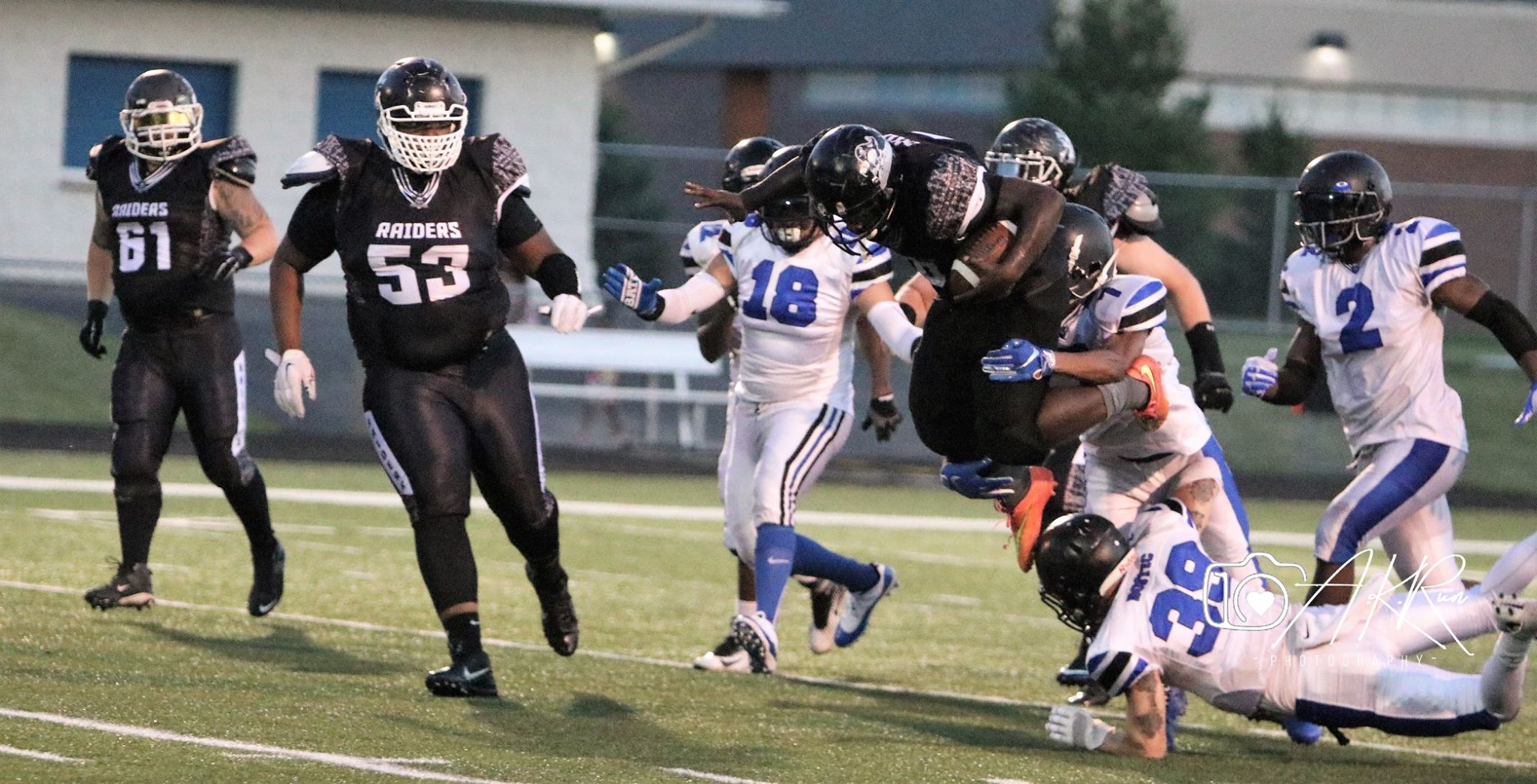 STOW, OH – On paper it might have been nearly three years since he had worn a pair of cleats and donned a uniform, Raiders QB Glenn Campbell had a banner day on Saturday as he accounted for 6 touchdown drives in his teams 47-8 road victory over Summit County.

With his squad short handed the Ohio offensive coordinator put his team on the scoreboard with 11:43 in the opening quarter when he connected on a 23 yard strike to Corn Strickland for their first hookup on the day to give their team a lead they would never relinquish.

After a Danny Skalecki punt traveled 42 yards and was returned inside Summit County territory the former Hiram College record setting wideout called his own number and rushed into the endzone from 5 yards out to give Ohio a 13-0 lead as the ensuing extra point was blocked with 7:20 to go in the first period.

Three possessions and three starts inside their opponents half of the field put the Raiders in the drivers seat again as Campbell hooked up with Strickland for the second time on just the second play of the drive for a 28 yard score and a 20-0 lead with 1:33 left in the first.

Another three and out forced by the Raider defense gave the offense the football at their own 23 near the end of the first quarter and resulted in the first non-scoring drive of the game as Campbell’s long toss down the sideline was intercepted by Summit County defensive back Amier Patterson.

Patterson’s long return set up the home offense inside Raider territory at the first time but resulted in a turnover on downs on an incomplete pass on fourth down at the Raiders 15.

The final score of the first half put Ohio on top 27-0 came on a 25 yard touchdown pass from Campbell to RodRico Stamps for his first catch and score on the season.

As he had done earlier on from his QB spot Campbell finished off a long drive for the Raiders on their first of the second half with a five yard scamper to run the advantage to 34-0. One of the key plays on the drive saw a 37 yard completion to James Keck that moved the offense deep into opponent territory and ultimately helped lead to the score.

Summit County began their opening drive in the third at their own 25 yard line thanks to the fifth touchback kick from Josh Brebant. Unlike their first half drives where Danny Skalecki was calling the signals, this drive would start with Marlo Drummond under center. Similar to the pressure Skalecki faced in the first half from the hounding Raider defense it was Drummond who found himself with a host of defenders in his face while trying to make plays.

A turnover on downs at the Ohio 20 flipped the offense to the black and white of the visitors and lasted just three minutes on the clock as a 42 yard run by Campbell and a 29 yard touchdown jaunt by Kylan Wells ran the score up to 40-0.

Corn Strickland picked up an interception on the next Summit County possession of the football but the Raiders were called for a holding penalty that negated a pass from Lance Kandel to Strickland himself for six and resulted ultimately in a turnover on downs that gave the ball back to their opponent near midfield.

5:06 remaining in the fourth and final stanza and a 36 yard pass from Drummond to Jacob Bostic put the Storm on the scoreboard before Drummond tossed a two point conversion pass to Avion Brown for a 40-8 score.

Lance Kandel had been knocked out of the game at QB on a previous drive but was able to move back out to the wideout spot and catch a 17 yard touchdown for his first of the day and the fourth of the contest tossed by Glenn Campbell for the games final margin of 47-8 with 1:07 left to play.

Summit County pulled out all of their tricks from the bag on the last play of the game in attempt to put another marker on the scoreboard as Skalecki caught a ball on a reverse and tossed it downfield for a 31 yard gain before the receiver was knocked down at the final horn short of pay dirt.

Summit County’s record falls to 3-3 in PAFL games and will play host to the NEO Silverbacks on Saturday evening at CVCA’s Royals Stadium while the Raiders move to 7-2 overall and 5-1 in PAFL contests.

Ohio sits at 3-1 in their division and will travel to New Kensington, PA for a battle against 3-1 Western PA in a 6pm battle Saturday night that could determine the conference’s #1 seed in the upcoming playoffs.

If you can’t make it to the game it can be heard live on Ohio Raiders Football Network.

In addition to Campbell who accounted for 91 yards rushing, 162 yards passing and 6 total touchdowns in the game, defensive coordinator Jermaine Campbell also played well on the defensive end in his re-debut after four years off as well as accounting for a carry for four yards late in the ballgame.

“We are short handed and even my coordinators are going to get some work in the game tonight” stated Raiders boss Adam Rogerson before the game.