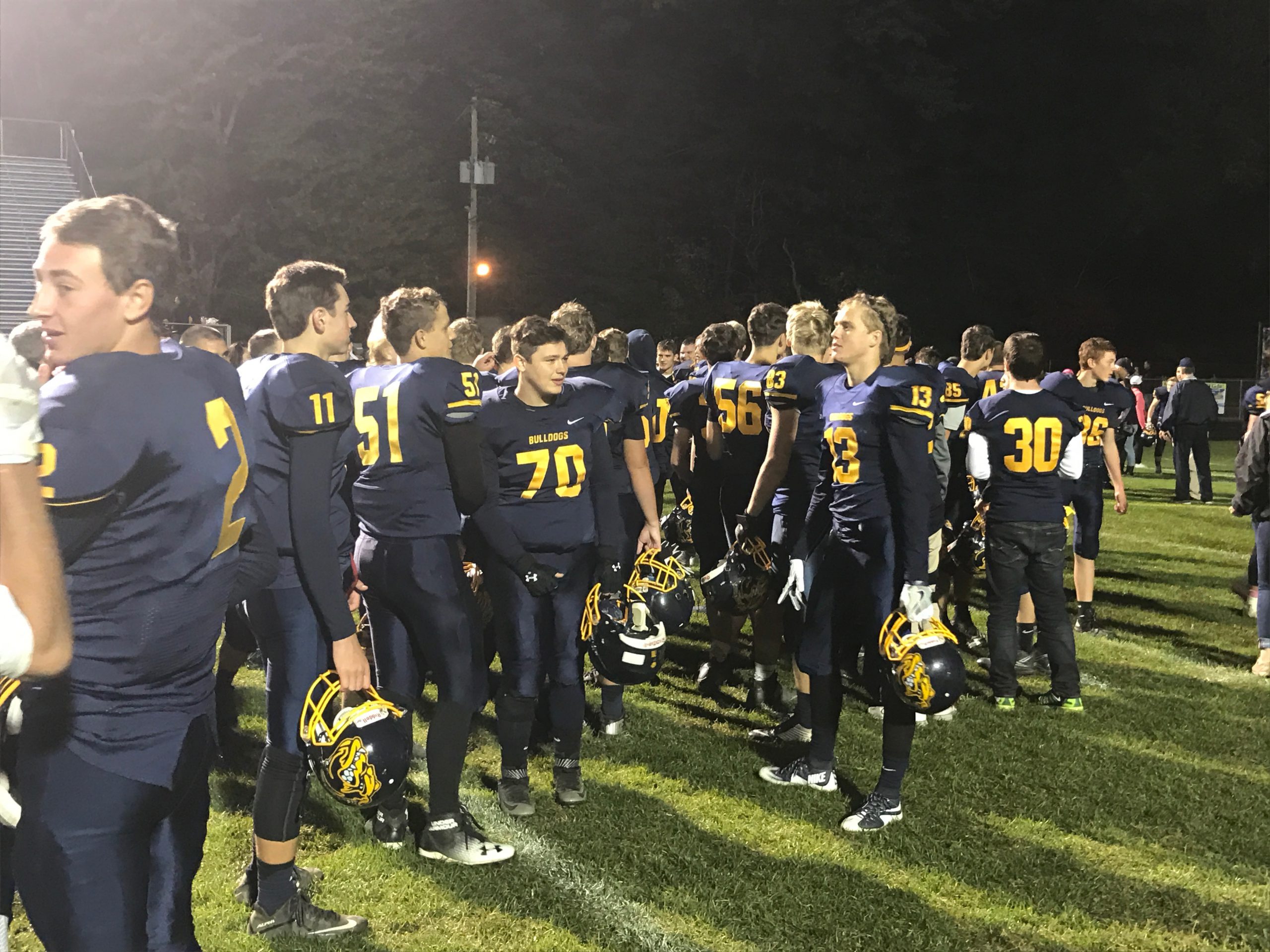 It was a thriller in Olmsted Falls as the Avon Lake Shoremen fell to the Olmsted Falls Bulldogs in the final seconds of the game.

The Shoremen got a lucky break early in the first quarter with a Bulldogs pass interference call but turned the ball over on their first drive when Avon Lake QB Mark Pappas Threw an Interception to give the Bulldogs good field position. After a few solid runs by RB Spencer Linville, the Bulldogs couldn’t covert on fourth down ad turned the ball right back over to the Shoremen. Pappas seemed to take a hit on the next Avon Lake possession after the Bulldogs defense tackled him in the backfield on a scramble but he stayed in the game but couldn’t convert on third and long and were forced to punt. Late in the first quarter, it would be the Shoremen that would score the game’s first points after a 44-yard pass from Pappas to WR Caleb Burr to set up the 6-yard touchdown pass to WR Carson Toy making the score 7-0 at the end of the first quarter.

Bulldogs RB Linville ran all over Avon Lake down to the 12-yard line where Luke Lombardo ran the ball into the endzone to tie the game up 7-7. On that drive, Linville broke 0ver 1,000 yards rushing for the season. Avon Lake shot themselves in the foot a few times with offensive pass interference calls. A 70 and a 40-yard Shoremen touchdown that was called back after the receivers pushed off the defenders. After Avon Lake gained yards back and were in the Olmsted Falls redzone, Pappas threw his second interception of the game. Olmsted Falls QB Brett Hutkay made some bug time throws to put the Bulldogs in scoring position and he did it again when he drove the team down to the 2-yard line when Linville ran it in to take the lead 14-7. With 28 seconds left, Pappas had a 40-yard bomb to Jason Sullivan to the 6-yard line and the Shoremen scored with four seconds left to tie the game at the end of the first half 14-14.

The Bulldogs started with the ball at the start of the second half and Josh Jaeckin ran over midfield from the 20-yard line to get the momentum going early. They took their time getting down the field as they ate up over half of of the quarter and capped it off with a 6-yard touchdown run by Jaeckin to take the lead 21-14. Avon Lake tried to answer back as they drove 70-yards that took the rest of the quarter. The Olmstead Falls defense was doing their best to get to Pappas and he had to scramble on a few plays but was calm and made the throws that he needed to get his offense down the field.

Avon Lake RB Jack Summers got the call on 4th and 1 and ran the ball over the pile of linemen to get the game back to a tie 21-21. On the first play of the next Bulldog possession, the ball was fumbled and recovered by the Shoreman giving them excellent field position at the Bulldogs 34-yard line. The Shoremen found themselves in a 4th and long situation and a illegal forward pass by Pappas voided an impressive touchdown and turned the ball back over to the Bulldogs with 9:01 remaining in the game. Trying to capitalize on the momentum swing from the turnover, Hutkay slung a ball out by the Bulldogs sideline that was intercepted on the Shoreman 27-yard line.

Avon Lake RB Tyler Nelson converted on a crucial 4th and 1 to keep the potential game winning drive alive. Pappas kept the ball himself to run down to the 6-yard line of the Bulldogs and Avon Lake scored on a Nelson run to put them up 28-21 with 1:38 remaining in the fourth quarter with one last chance for Olmsted Falls to tie or possibly win the game. Hutkay started the drive with a 33-yard run and moved them to Shoremen territory. With some clutch throws by Hutkay, Olmsted Falls found themselves inside the Avon Lake 10-yard line with only seconds remaining and score with only 14 seconds left with a run by Hutkay and score the 2-point conversion and would go on to win the game 29-28.