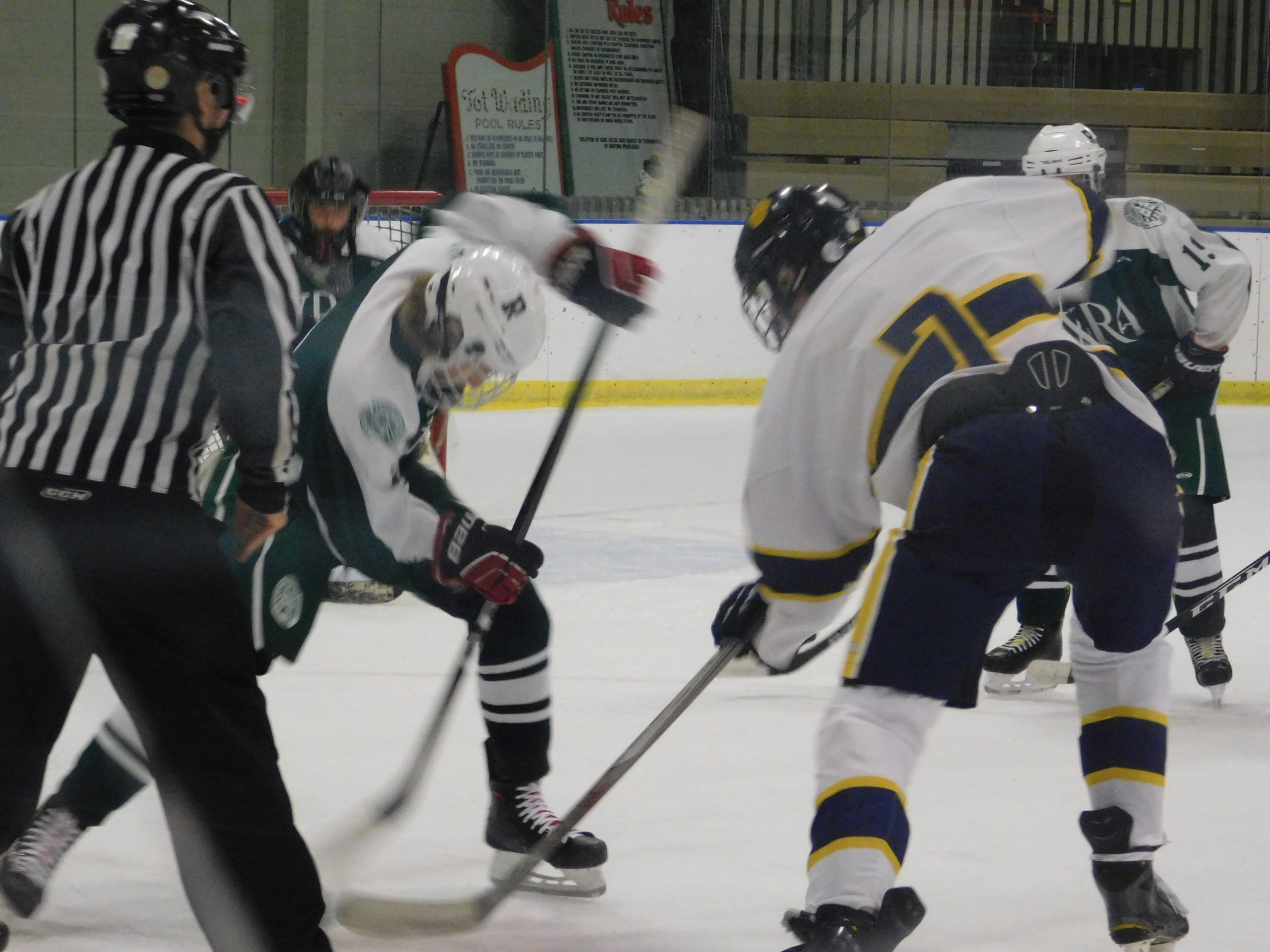 BROOKLYN, OHIO – Like a battle between two heavyweight boxers, Olmsted Falls’ Dominic Conte and Western Reserve Academy’s Tommy Wagner put on a show for each of their teams Sunday in a wild Greater Cleveland High School Hockey League game in Brooklyn.

Conte had just a little more help from his Bulldogs as Olmsted Falls skated to an 8-5 win, pushing their early season mark to 2-1 on the season.

On the evening, Conte accounted for four goals and an assist, with three of the goals coming in the second period (two less than a minute apart) as the Bulldogs lit the lamp six times in the second to build a 7-4 lead after two.

Wagner had a huge night for the Pioneers, who drop to 1-1 with the setback, as the senior Captain put in five goals two in the first, two in the second, and one in the third.

Not only did Wagner score five times, but all of his goals minus one were unassisted in the amazing effort for the senior leader of the Pioneers.

Kenny Stone got the start in net for the Bulldogs, and he recorded the victory, stopping 29 shots on the evening. Adam Goad suffered the setback in net for the Pioneers.

Wagner put the Pioneers up 2-0 in the first, as he scored the games first two goals, the first with 5:58 to play in the period, and the second just :24 seconds later.

The Bulldogs got a goal from Mike Kirth-Gruszczynski to make it 2-1 just :29 seconds after Wagner’s second goal, setting up things to come for the two teams in a wild second period.

Olmsted Falls came out shooting, as Conte scored twice, once at the 13:14 mark and again at the 12:24 mark to give the Bulldogs a lead they would never lose at 3-2.

Jake Kerkay made it a 4-2 Bulldogs lead at the 8:18 mark, with an unassisted goal to push it to a two-goal lead for Olmsted Falls.

Wagner continued his huge night with his third goal, Ian Richardson and Lucas Martinez getting assists to draw the Pioneers within one at 4-3.

The Bulldogs attack on the net continued, as they then scored three more times in the period before the Pioneers would counter, Conte getting a goal at 6:22, followed by Kerkay’s second goal at 6:01 to make it 6-3.

Olmsted Falls then made it 7-3 as right winger Noah Voelker scored to make it 7-3 with 4:50 to play in the period.

Wagner scored for the fourth time on the night, this time coming with the Pioneers fighting off a 5-3 power play. The goal with 2:48 to play in the second closed out the period scoring with Olmsted Falls leading 7-4.

The final period saw the teams’ two big goal scorers trade goals, with Wagner scoring his fifth and final goal of the evening, the unassisted goal came with 13:33 left to make it 7-5.

Conte ended the scoring and put the Bulldogs back up by three with his final goal of the night, getting an assist by Max Kirth-Gruszczynski with 11:38 left to make it 8-5.

Olmsted Falls’ defense played well in the final 11 minutes, making sure to shut down Wanger and that there would be no Pioneer comeback as they skated to the 8-5 win.

Olmsted Falls returns to the ice on Saturday, December 8th as they will be on the road to challenge the Midview Middies. Western Reserve is back in action on Friday, as they will play host to Midview in Kent.

Click the Pages for Some Pics of the Action Between Western Reserve Academy and Olmsted Falls!