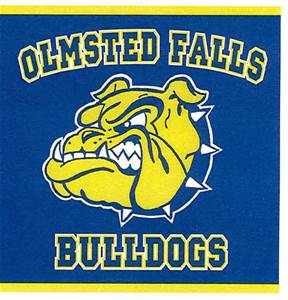 This game recap is brought to you by: Setta Trophy Inc. “Celebrating Champions for over 40 Years.” visit them at www.settatrophy.com.

BEREA, Ohio- On a cool, made for football evening at Finnie Stadium in Berea, the Olmsted Falls Bulldogs showed up to defend the “Battle of Bagley” Cup that they won last year with a 30-27 victory over rival Berea-Midpark, and defend it they did, in convincing fashion with a dominating 75-38 win Friday night. It’s not the Old Oaken Bucket, not the Paul Bunyan Trophy, nor is it the Little Brown Jug, but what it is, is bragging rights for 2 schools separated by only 3 miles and the Bulldogs made sure the trophy stayed home with them. Olmsted Falls scored early and often and never looked back setting a school record for points in a game.

Quick strikes and big plays were the norm for the Bulldogs this evening and it all started after they forced the Titans to punt after the first series and promptly scored on a 2 play 71 yard drive capped off by a 79 yard pass play from QB Brett Hutkay to WR Tyler Neely to give the Bulldogs an early 7-0 lead. The Titans were not without their stars this evening, evidenced by the extraordinary performance by Sr. RB Tyrese Holland who ran for 235 yards on 22 carries and all 6 of Berea-Midpark’s touchdowns. Holland tied the score at 7-7, with  17 yard run capping a 4 play 54 yard drive. The first quarter scoring was just getting started, however, as the Bulldogs came right back with a 4 yard run by So. Michael Howard and a 61 yard interception return by Sr. DB Andrew Turski. Holland followed that with a 10 yard run for his second touchdown to make the score 21-14 after one quarter.

The second quarter began with a 6 play- 76 yard drive finished off by RB Spencer Linville to give the Bulldogs a 28-14 lead. After a 3 and out by Berea-Midpark, Turski scored on a beautifully thrown ball by Hutkay for a 48 yard touchdown pass, the extra point failed and Olmsted Falls was on their way to the romp, leading 34-14. Holland would not let the Titans fold however, and scored on a 75 yard run and a 14 yard run, and right before the half, Hutkay connected with WR Josh Goodwin on a 65 yard bomb to get the Bulldogs comfortably ahead 48-32 at the half.

The second half was all Olmsted Falls with scoring plays of 5,13,1 and a 44 yard scamper by So. Jack Spellacy. Holland scored his sixth touchdown of the game on a 13 yard run in the 3rd quarter but the Titans could not overcome the Bulldogs firepower. Olmsted Falls were led by the running of Linville 16 carries 105 yards and 2 td’s, and Hutkay, who threw for 225 yards on 5 for 6 passing and 3 td’s, and ran for 114 yards on 8 carries and one score.

After the game Head Coach Tom DeLuca: ” It’s a rivalry game for us… both teams played hard and we were fortunate to come out on top… it’s our goal to wear teams down and our play action was great tonight, we were able to do some good things on offense.” In the locker room QB Brett Hutkay had this to say: “It was amazing out there tonight, they were so keyed up on our running game so we took advantage of their safety over the top and it worked out well for us.”

Olmsted Falls improves to 5-1 for the season, 4-1 in conference play, while Berea-Midpark falls to 2-4 overall and 2-3 in the conference. The Bulldogs host the Middies of Midview High next Friday night at 7pm in a battle of 5-1 teams while the Titans travel next Friday to face Avon Lake.