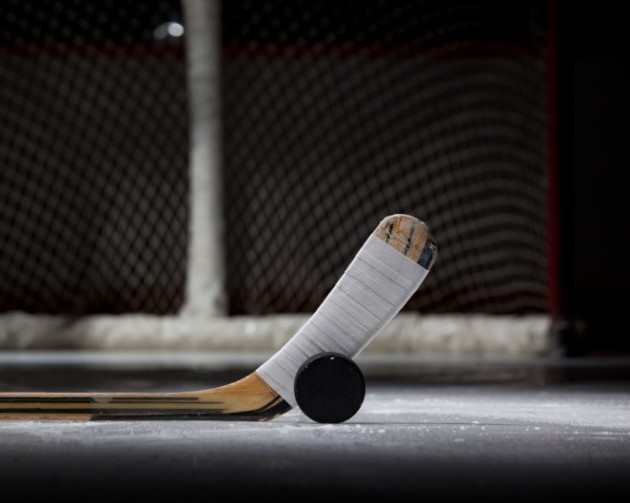 As the smoke cleared on Saturday night, the four semi-final teams for the Brooklyn District were determined.

The district’s #1 seed St. Ignatius took the ice for the first game of Saturday against Midview. The game was never in doubt for the Ice Cats, as they erupted for nine goals in the game. The defensive stand was in full effect Saturday, as St. Ignatius only surrendered one goal. 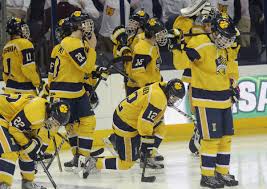 The top seed advanced to the semifinals with a 9-1 victory. They will face off against Holy Name on Tuesday, March 1st at 7pm. Holy Name will have to be at their best, as they lost the previous two meetings against the Ice Cats.

The Green Wave advanced to the semifinals on Thursday, defeating Rocky River 3-2 in a game that showed how Holy Name responded to adversity. The Green Wave fought back from a 1-0 deficit and never trailed after that. 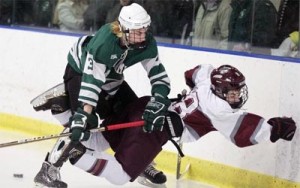 Holy Name will have to be score early and often, as St. Ignatius is outscoring their opponents 20-2 in this District Tournament. Holy Name will be coming in with some momentum after defeating Rocky River, which can hopefully be translated into early offensive production.

In the second game on Saturday, St. Edward’s matched up against Avon. St. Ed’s scored a goal in the first period, but they were held in check during the 2nd period. St. Ed’s was able to increase their lead to 2-0, as that would be enough to move on to the next round. They would have to wait and see who they would face in the semi-finals, as the next game would determine their opponent. 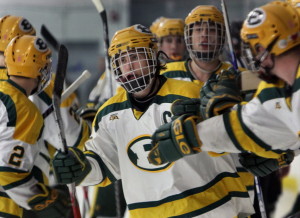 The last game of Saturday was between Padua and North Olmsted. Both teams were feeding off the crowd, as everyone in attendance knew how important this game was going to be. 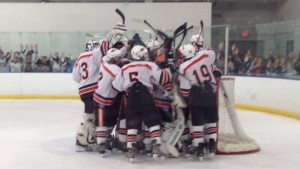 The Bruins capitalized on every North Olmsted miscue, scoring three times in the game. As the final horn sounded, the Padua Bruins defeated North Olmsted 3-0. The second semifinal was set: St. Edward versus Padua.

These two teams have already faced each other this year, with the Eagles defeating the Bruins both times. Neither team has allowed a goal in this tournament, so all eyes will be on the goalies for this game: Warren Hill for St. Edward and Lynsey Wallace for Padua.

Hill is a Senior and Wallace is a Junior, so experience might become a factor. Wallace has been untouchable in this tournament so far, so it will be interesting to see Wallace match up against that veteran St. Edward offense. This semi-final game will be played on Wednesday, March 2nd at 7pm.

Only four teams remain. Who will punch their tickets to the District Finals?