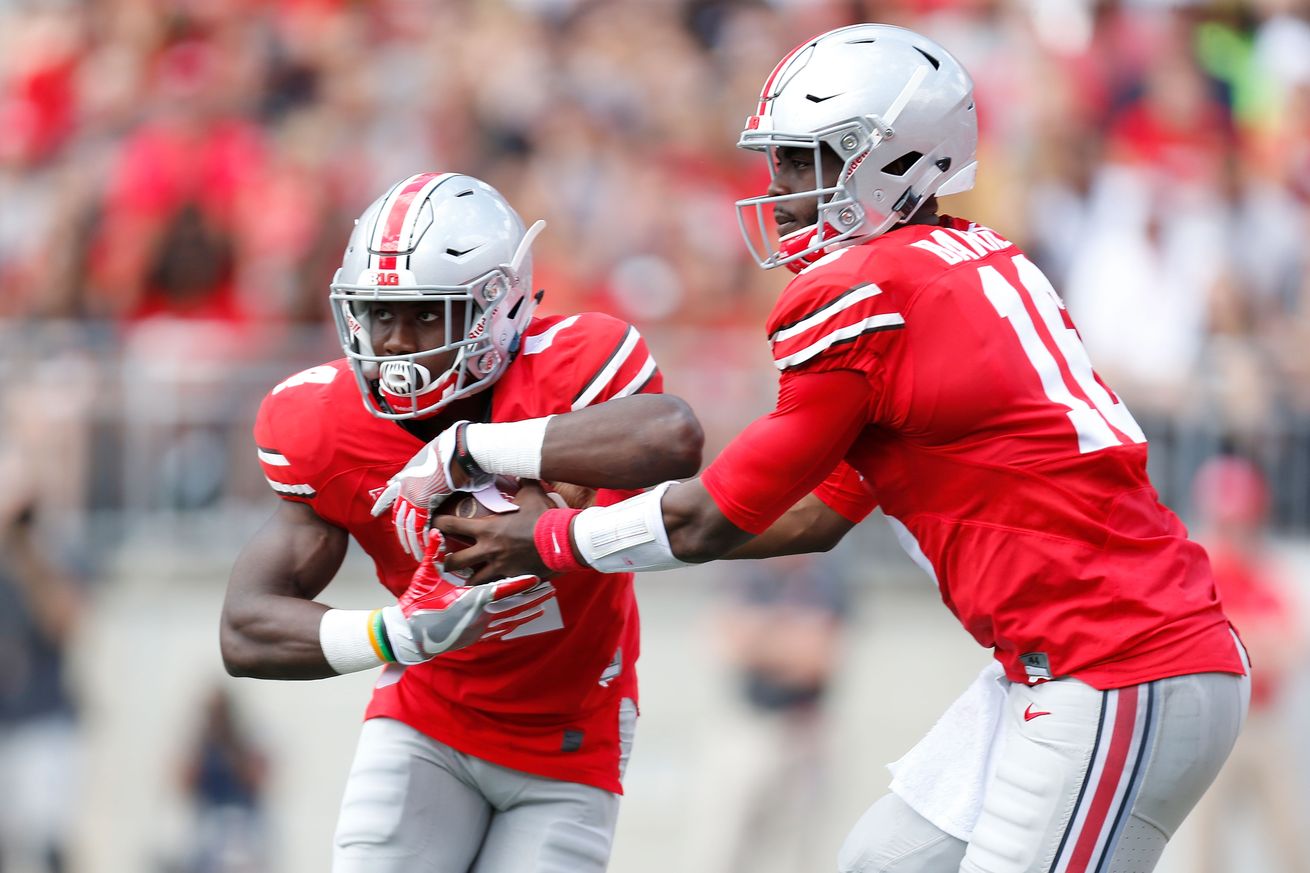 Ohio State will most likely cruise to victory in its Week 2 match against the Tulsa Golden Hurricane, but that doesn’t take away from some meaningful reasons to watch this game.

The Buckeyes are favored by 28.5 points, but Tulsa is a step up from Bowling Green, who Ohio State crushed 77-10 in its opener.

The Golden Hurricane defeated San Jose State 45-10 in Tulsa, proving they have a potent offense.

Although there’s not much evidence for fans to expect a close game, there are still quite a few reasons to keep an eye on this one, as the Buckeyes play their final tune-up before a critical road game at Oklahoma, which will go a long way in determining Ohio State’s fate in the College Football Playoff picture.

Here are five reasons to watch the Week 2 match between Ohio State and Tulsa.

1.  The Running Back Committee

Weber did not look like most redshirt freshmen, bulldozing through tacklers to average 7.2 yards per carry in his college debut.

The level of competition obviously has to be taken into consideration, but the loss of Ezekiel Elliott to the NFL does not seem as devastating after watching that one-two punch roll through BGSU.

Tulsa’s defense may not be as weak as that of Bowling Green, but fans can expect another big day out of those two.

What makes Samuel such a dynamic player is his versatility in the passing game, as well. The junior caught nine passes for 177 yards, scoring two receiving touchdowns and picking up one on the ground.

It’s obviously far too early to know if he can maintain that type of production when the competition becomes tougher, but there’s no reason Samuel can’t explode for another huge statistical day against Tulsa.

Samuel made note after the BGSU game that he is aware of his role as one of  the main playmakers 0n the team and said, “It’s a great feeling just knowing that I’ll probably be the one of the first ones out there touching the ball.”

For now, he’s flourishing in that role, despite the turnover of so many playmakers to the 2016 NFL Draft.

True freshman Demario McCall, a product of North Ridgeville High School, also made his presence felt in Week 1, and figures to be a part of the running back rotation, or at least should be in a game that is expected to be a blowout.

McCall ran for 54 yards on eight carries, scored one rushing touchdown, and caught a 34-yard touchdown pass, finding the end zone twice in his Ohio State debut. Not a bad grand entrance to “The Shoe.”

It’s unclear if McCall will see playing time in Week 3 against Oklahoma, but the Tulsa game could be a great opportunity for him to impress head coach Urban Meyer again.

Running back/wide receiver Dontrae Wilson also was involved in the ground attack against Bowling Green, rushing for 36 yards on five carries, which was another example of Meyer’s love for mixing up the play calling.

Don’t be surprised if Wilson gets a handful of carries against Tulsa, too.