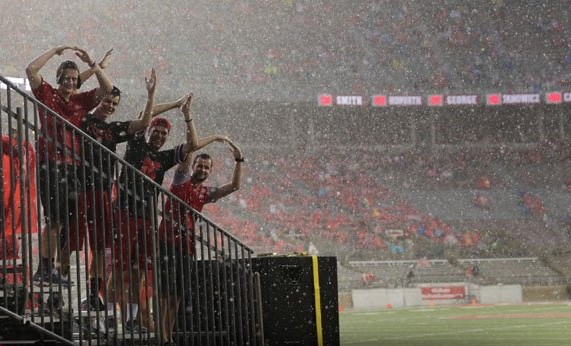 The Ohio State Buckeyes (4) got out to a sluggish start in their week 2 match against Tulsa, but went on to win 48-3, thanks to a dominant defensive performance.

It was knotted up at three at the end of the first quarter, as the Buckeyes could not get into a rhythm offensively.

Their only points in the first quarter came courtesy of an interception by Marshon Lattimore, which set the Buckeyes up in great field position at the Tulsa 16-yard-line, but Ohio State would settle for a field goal.

Ohio State took the lead early in the second quarter, when walk-on kicker Tyler Durbin made his second field goal of the game.

The Buckeyes broke through late in the first half, when Malik Hooker returned an interception 26 yards for a touchdown, giving OSU a 13-3 lead. It was Hooker’s third interception in two games.

Tulsa would commit two more turnovers in the next three minutes, the first of which was a fumble, followed by another interception returned for a touchdown, this time by Lattimore, for his second pick of the game.

The Buckeyes would enter halftime leading 20-3.

The Tulsa Golden Hurricane happened to be in Columbus for one of the worst storms in recent memory during a Buckeyes game, as lightning caused the game to be delayed for one hour and nine minutes.

Ohio State’s offense came to life to start the second half, as junior quarterback  J.T. Barrett scored an 11-yard rushing touchdown to make it 27-3.

Running back Mike Weber had a relatively quiet first half, but got rolling in the third quarter, scoring his first rushing touchdown of his college career to make it 34-3 and would finish with 89 yards on 16 carries. The redshirt freshman has ran for over 200 yards in his first two games.

Barrett ran for his second touchdown of the game early in the fourth quarter, extending the lead to 41-3. It was his third rushing touchdown of the season and the Heisman candidate has nine total touchdowns in two games.

Dontre Wilson got in on the action, scoring a five-yard rushing touchdown to make it 48-3.

Curtis Samuel picked up 136 total yards on offense, gaining 78 on the ground and 58 in the passing game, as the H-back has amassed just under 400 total yards in only two games.

Ohio State’s first test comes on Sept. 17 at Oklahoma (14), which figures to be a key game in determining the Buckeyes’ playoff chances.