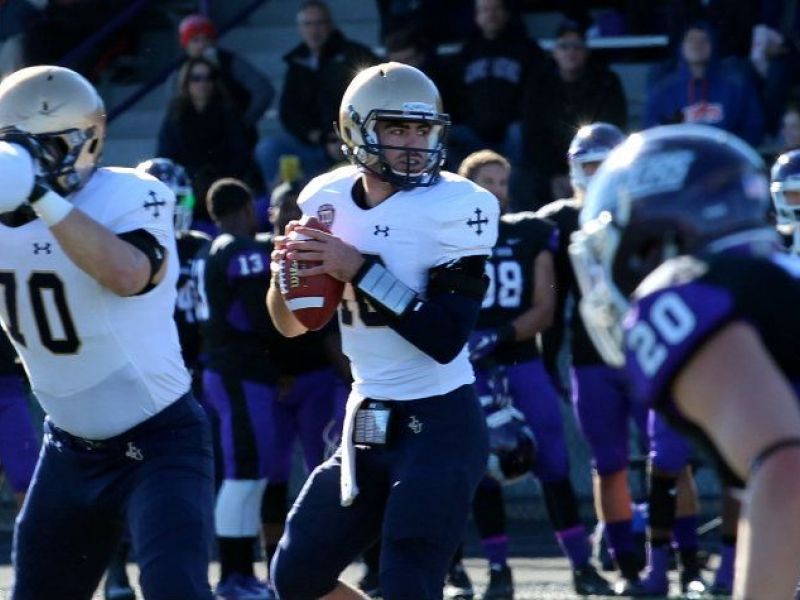 UNIVERSITY HEIGHTS – The John Carroll-Mount Union rivalry follows a blueprint, with the top-ranked Purple Raiders usually taking an early lead before the Blue Streaks piece together a promising rally down the closing stretch.

Saturday afternoon’s bout lived up to the hype of an instant, yearly classic.

Despite facing a 17-0 deficit, JCU battled until triple-zeroes illuminated a scarlet-red coloring on the scoreboard, coming back to tie the game at 24-24, before falling 31-27 against UMU at Don Shula Stadium.

Senior William Woods had a banner day to end his collegiate career, hauling in a career-high nine receptions for 93 yards and two touchdowns, while senior Mason McKenrick notched a team-high nine tackles and one sack in the hard-fought, losing effort.

The defeat hands the No. 2 Purple Raiders the Ohio Athletic Conference title, a perfect 10-0, 9-0 OAC record and a top seed in the 2017 NCAA Tournament beginning next week.

One year removed from his historic touchdown catch that propelled John Carroll to its first OAC title since 1989, Woods displayed his best performance in the biggest game once again. His seven-yard TD prior to the intermission brought the margin to 10 points (17-7), providing just enough momentum heading into the second half.

The East Cleveland native furthered his breakout day with a 16-yard strike midway through the third quarter, downsizing the deficit to three points (24-21).

Quarterback Anthony Moeglin developed a rapport with the wideout right from the outset, targeting him on countless occasions throughout the late-game drama.

Freshman Michael Canganelli was all over the place on kickoff returns, tallying 33, 64 and 95 yards on three of his four opportunities, the last of which was a touchdown at the inception of the second half.

Although listed as a running back, Canganelli has made an impact in a variety of fashions, providing depth and explosiveness when his team needed it the most.

Kicker Matt Danko rounded out the offensive production with a pair of field goals from 23 and 32 yards, giving him a 72.2% conversion rate on the campaign.

Following Danko’s 23-yard FG, Moeglin threw an interception at the culmination of the third quarter, providing Mount Union with favorable field position in a 24-24 tie.

Danko chipped in another field goal and the Moeglin-Woods tandem hooked up on a critical fourth-down play, but the pendulum of momentum swung back to the Purple Raiders on a pair of sacks within the last 90 seconds.

The Blue Streaks take on the Wisconsin-Stevens Point Pointers to begin the 2018 campaign at a date and time to be announced later.