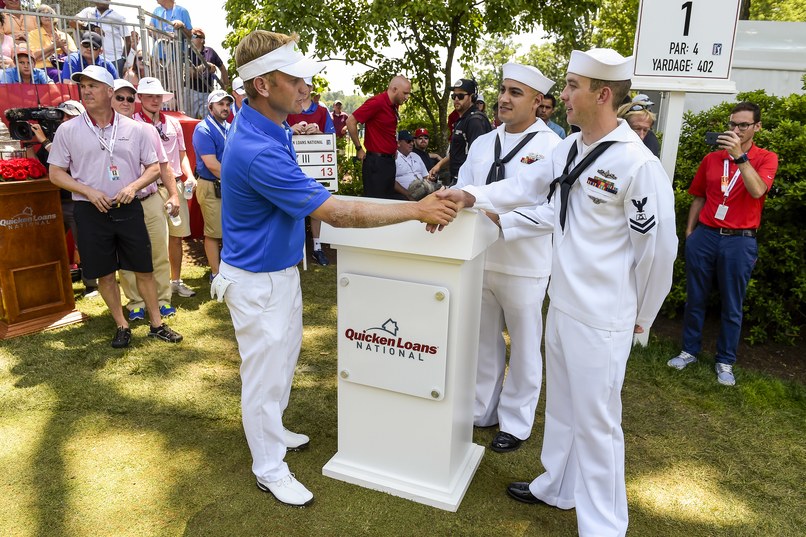 Billy Hurley III finished the final round of the Quicken Loans National tournament on a bit of a hot streak chipping in on the 15th hole and a birdie on 16. From there, Hurley III went into the final two holes with a 3 shot lead at 17 under par over familiar face Vijay Singh who shot 14 under.

Other familiar faces like Ernie Els finished 12 under. And no disrespect to the players of the Quicken Loans, but any weekend after a Major is usually scarce of marquee names…did Hurley III get lucky that the field was such? Perhaps. But oh well.

Hurley III, The Naval Academy alum (2004, Quantitative Economics) turned pro in 2006. Before the win, Hurley was ranked 607th in the world. This was also his first PGA Tour win which adds to the list of first time winners this season.

Quick note: a name to look out for is John Rahm, Arizona State. This was his first professional start on the Tour and finished tied for 3rd with Bill Haas. He is a big and long bodied player from Spain who knows how to crush the ball and has plenty of finesse on and around the greens. No offense to John, but I would call him a thicker Dustin Johnson because they are similar height and have similar swings. Johnson is about an inch or two taller, give or take, but length and strength make for a beautiful combination to maximize your distance, which maximizes your chances to shoot low.

Johnson Finally Gets it Done at Oakmont Despite Looming Controversy
Akron hosts PGA’s best and brightest: Day gives it away to Johnson