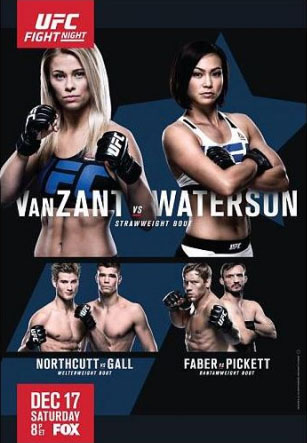 Tonight’s UFC Fight Night: Sacramento boasts a card filled with many up-and-comers. Mickey Gall, Sage Northcutt and Paige VanZant all try to show the world that they are the future of MMA. While all this is going on, one of the greatest fighters in the sport says goodbye.

Urijah Faber will head down to the Octagon one more time tonight, as he faces Brad Pickett in his retirement fight. Faber has done things for the sport that will forever be appreciated. He has been a main part of building up Team Alpha Male. He has had wars with Dominick Cruz that have put the Bantamweight division on the map and made it one of the most must-see divisions. These are just a few of the accolades that the former WEC Featherweight Champion has on his resume.

Tonight, Faber looks for one final win in his hometown of Sacramento, California. He will try to go out on top while showcasing what the future of Team Alpha Male will look like.

It’s going to be an exciting card to watch, so here are my predictions for UFC Fight Night: Sacramento.

Alan Jouban vs. Mike Perry– Perry is extremely dangerous with his hands, but he will have to be mindful of the veteran Jouban. Perry is undefeated at 9-0 and he is yet to be tested. Jouban isn’t the guy to test Perry, as he is a veteran who hasn’t fought top guys. However, Jouban could stun Perry by using his experience in the cage, though highly unlikely in my opinion. I believe Perry will unleash his fists early and finish Jouban off in the first round with a knockout.

Urijah Faber vs. Brad Pickett- Faber will not lose his last fight, especially when it’s in his hometown. For everything Faber has done, he knows he has to win this fight and finish his career with his arm raised. Pickett comes into this fight 1-4 in his last five fights, being finished in two of those four losses. A veteran of the sport, Pickett will bring his “A” game to this fight. Unfortunately, it won’t be enough. Faber will pick apart Pickett for three rounds and win unanimously.

Sage Northcutt vs. Mickey Gall– Two rising stars in the world of MMA collide tonight in the co-main event of the evening. Gall has finished Mike Jackson and CM Punk in his two fights, which obviously doesn’t mean a lot. But the fact that he has made quick work of the two opponents he has faced does make people wonder how far he can go, especially as the talent level of his opposition increases. Sage has suffered a loss to Bryan Barberena where Sage looked outmatched. If Sage gets taken down, can he get out or defend himself? For Mickey, can he exchange with Sage on their feet? Mickey Gall makes it seem like he wants to punish Northcutt, so I could see him purposely prolonging this fight longer than it should go. I think Gall continues to put the MMA world on notice, as he calls out his next opponent after a dominating win over Northcutt.

Paige VanZant vs. Michelle Waterson- Waterson has been fighting for quite some time now and has even held the Invicta Atomweight Championship, so she knows how to handle big moments. VanZant has only faced one big obstacle in Rose Namajunas, where she looked out of place and ultimately was submitted by Namajunas in the fifth round. Although she is very good in the clinch, VanZant will still have to be wary of how she attacks Waterson. Waterson is crafty on the ground and has finished eight of her opponents by submission. That sounds like a bad time for PVZ, as she will be in trouble all night trying to avoid being taken to the ground. Waterson will make VanZant submit after she wears her down.