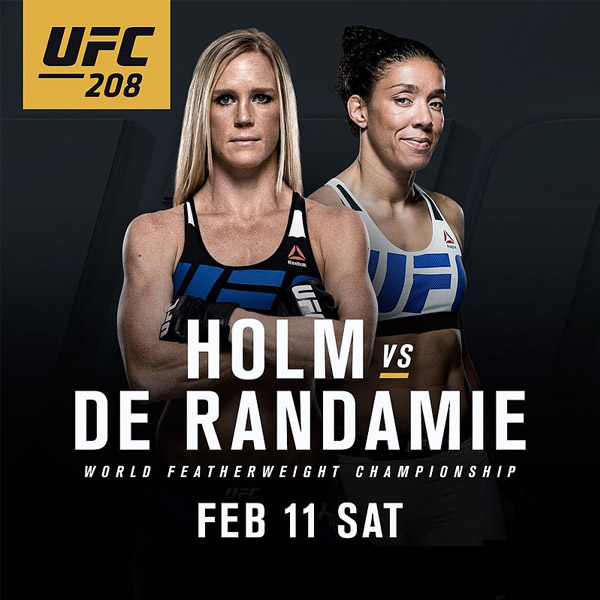 UFC 208 is upon us tonight from Brooklyn, New York. The headliner is Holly Holm versus Germaine de Randamie for the inaugural UFC Women’s Featherweight Championship. Holm is known for her stunning knockout of Ronda Rousey to win the UFC Women’s Bantamweight Championship, delivering the first loss to the woman known as “Rowdy” Since then, she has lost her UFC Bantamweight Championship to Miesha Tate in a shocking fifth-round submission defeat and then would continue her woes with a lackluster performance in a decision loss to Valentina Shevchenko. Germaine de Randamie is a storied kickboxer and has been looking for her big break. The two women on different paths will meet Saturday, both looking to kick off their 2017 in grand fashion.

There are some other big fights on this card, such as Anderson Silva making his return to the Octagon against a very determined Derek Brunson. Also, Jim Miller will be looking to continue his resurgence into the middleweight division when he squares off against Dustin “The Diamond” Poirier. Without further ado, let’s get to my picks for UFC 208!

Jim Miller vs. Dustin Poirier– Miller is on a three-fight winning streak and will look to extend that against Poirier, who is coming off of a devastating loss to Michael Johnson. I think that Poirier will bounce back and get a big win over Jim Miller, starting up another streak for “The Diamond”. Winner: Dustin Poirier

Jared Cannonier vs. Glover Teixeira– Teixeira is a very experienced fighter who has fought top fighters for a long time. Cannonier, though impressive against Ion Cutelaba in his last outing, will be unable to keep up with Teixeira. I have Glover winning in a fight that keeps him in talks for the next title fight at Light Heavyweight.

Ronaldo Souza vs. Tim Boetsch– Boetsch had a very impressive showing against Rafael Natal at UFC 205, but this isn’t an ideal fight for him. Ronaldo “Jacare” Souza has been waiting to fight anyone, especially after Luke Rockhold had to pull out of their fight late last year. I think Jacare wears Boetsch dow and submits him late.

Anderson Silva vs. Derek Brunson– Silva is back and this time has had a full training camp to work with. Silva has had some disappointments as of late, losing to Michael Bisping and Daniel Cormier in his last two battles. Brunson is a tough fighter who proved how tough he is when he caused a stoppage in his fight against Uriah Hall. Though Brunson is a very good fighter, I think “The Spider” is back.

UFC Women’s Featherweight Championship: Holly Holm vs. Germaine de Randamie– Holm has the opportunity to become a two-division champion tonight and can also remind the world how dangerous she is. It is weird that she received this title fight while on a losing streak, but that is beside the point. Holm is a premier boxer and can end a fight at any time. Germaine de Randamie is a very great kickboxer, so it is a very cool fight to watch. I think Holm will work her style of fight, keeping close distance with de Randamie so that she can land efficiently. Tonight will be a night where the world once again remembers who Holly Holm is.