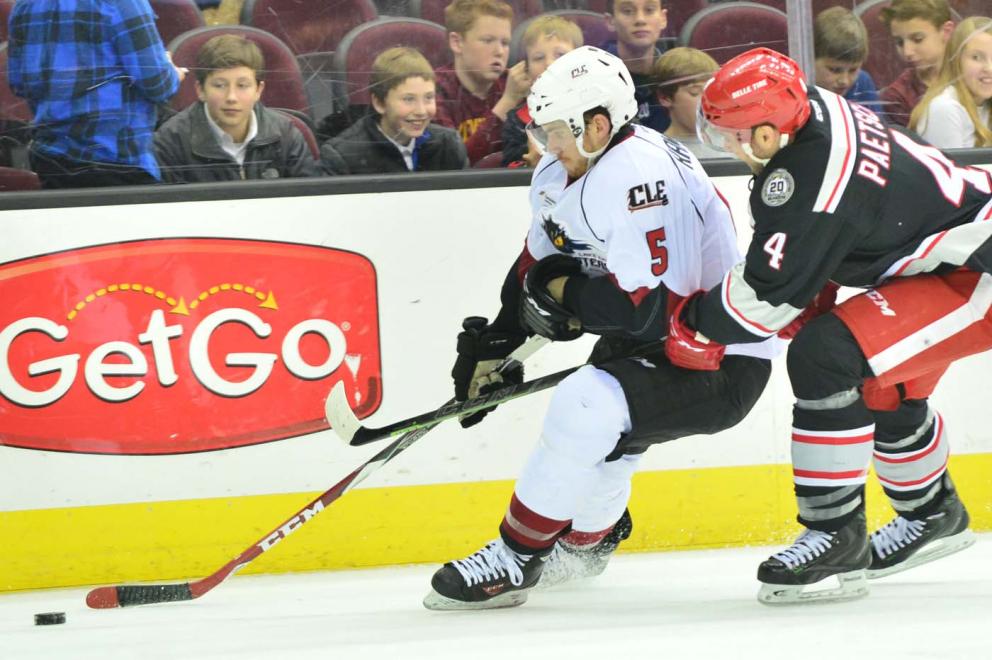 CLEVELAND – In the sixth of eight meetings between the two teams this season, Cleveland’s Lake Erie Monsters defeated the Chicago Wolves on Thursday at The Q by a final score of 5-0.

With the win, the Monsters’ fourth consecutive victory, the Monsters improved to 26-16-4-3 overall this season and with a .602 points percentage, claimed third place alone in the AHL’s Central Division standings.

In the opening period, the Monsters grabbed a 1-0 lead at 4:08 when Eric Roy and Michael Chaput combined to set up Steve Eminger for an even-strength goal before Daniel Zaar notched his team-leading 12th marker of the season at 6:47 of the middle frame to push the Lake Erie lead to 2-0.

In a remarkable third-period sequence, the Monsters posted three shorthanded goals in the span of 1:01 and established Lake Erie’s final margin of victory at 5-0.

Manny Malhotra was credited with an empty-net score at 17:57 on a play in which Malhotra was hauled down by Chicago’s Andre Benoit without so much as making contact with the puck, before Nick Moutrey tallied his fifth goal of the season at 18:23 into an empty net with Michael Chaput collecting an assist on the play.

Following the Monsters’ pair of empty-net goals, the Wolves replaced their goaltender, Jordan Binnington, but despite his presence, surrendered another man-down marker to Trent Vogelhuber at 18:58 that capped the scoring thanks to assists from T.J. Tynan and Eminger.

Monsters goaltender Brad Thiessen was named the game’s first star after registering his third shutout of the season, a 24-save showing that pushed his record to 8-2-2 overall this year. On the other side, Binnington fell to 10-9-3 in net for the Wolves despite stopping 26 of the 29 shots he faced.

With their fourth straight win, the Monsters matched their longest winning streak of the season, a run of four consecutive victories from November 13th to November 21st.

Next up for the Monsters, it’s a Saturday road clash vs. the Texas Stars with full coverage underway from Cedar Park Center in Cedar Park, TX at 8:00 pm.