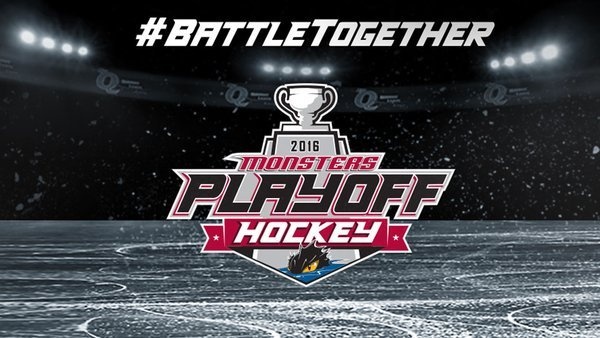 ROCKFORD, IL – In the franchise’s first Calder Cup Playoff appearance since 2011, the Lake Erie Monsters claimed a 1-0 lead in the team’s first-round Central Division Semi-Final best-of-five game series vs. the Rockford IceHogs by virtue of a 5-2 victory on Wednesday at the BMO Harris Bank Center in Rockford, IL.

The Monsters grabbed a 1-0 lead at 8:32 of the first period on Wednesday when Sonny Milano sent a ricocheting puck off the post, and a Rockford defenseman, for his first of the playoffs at even strength on feeds from Ryan Craig and Zach Weresnki. After successfully killing a penalty late in the frame, the Monsters pushed their lead to 2-0 on a one-time crank from Werenski at 19:41, thanks to a visionary setup from Alex Broadhurst and Michael Chaput.

Lake Erie collected the middle frame’s lone score at 11:11 when Dean Kukan scalded home a left-circle slapper on the power-play to make it 3-0 Monsters with Oliver Bjorkstrand and Broadhurst posting assists on the play. Lake Erie extended their lead to 4-0 at 9:04 of the third when a power-play marker from Broadhurst developed in the right circle thanks to a nifty passing play by Kukan and Bjorkstrand.

Rockford rallied with back-to-back even strength goals from Tyler Motte at 14:54 and Dennis Rasmussen at 16:18 of the third, respectively, but an empty-net power-play score from Trent Vogelhuber at 18:58, fed by Dillon Heatherington and Chaput, established Lake Erie’s 5-2 final margin of victory.

Joonas Korpisalo earned the win in net for the Monsters by virtue of a 28-save performance while IceHogs net-minder Mac Carruth made 21 stops on 25 pucks faced in defeat.

Next up for the Monsters, it’s game two of the Central Division Semi-Finals vs. the IceHogs on Thursday

Cavs Aren’t the Only Ones in the Playoffs; Monsters Face IceHogs in AHL Central Division Semi-Finals
Quicken Loans Arena: The Best Home Ice Advantage in the AHL