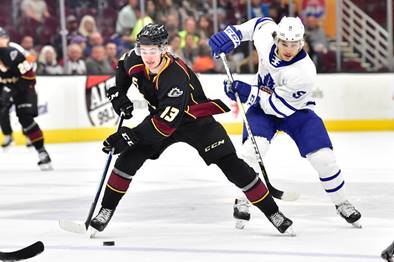 The Monsters fell to the Toronto Marlies on Tuesday at Rocket Mortgage FieldHouse in Game 4 of the best-of-seven North Division Final by a final score of 6-2 and were thereby eliminated from the Calder Cup Playoffs.

With the win, Toronto claimed the series four games to none and advanced to the Eastern Conference Final.

Cleveland’s Trey Fix-Wolansky scored his first professional goal 2:54 into the opening period to give the Monsters an early 1-0 lead with Dillon Simpson and Gabriel Carlsson collecting assists on the play. Zac Dalpe doubled Cleveland’s lead with a power-play tally at 6:58 of the period courtesy of helpers from Fix-Wolansky and Tommy Cross.

Two Marlies players recorded four unanswered goals in the second period to claim a 4-2 lead for Toronto heading into the final intermission. Mason Marchment scored one minute into the frame and posted a subsequent power-play goal at 3:47. Then, Trevor Moore converted at 7:12 of the period before adding a power-play tally at 9:56.

In the third, Toronto’s Michael Carcone scored at 4:56 and sealed a 6-2 Marlies win with an empty-net goal at 19:23 to end the Monsters’ season.

Cleveland goaltender Brad Thiessen finished the postseason 3-5 following a 21-save performance while Marlies backstop Kasimir Kaskisuo posted 23 saves to improve to 7-0 in the playoffs.