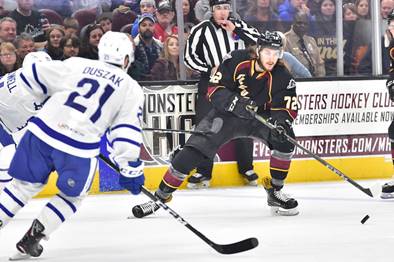 The Monsters were defeated on Sunday at Rocket Mortgage FieldHouse by the Toronto Marlies in Game 3 of the team’s best-of-seven North Division Final series by a final score of 2-0.

Following the loss, the Monsters now trail the Marlies three games to none with Game 4 of the series on Tuesday in Cleveland at 7:00 p.m.

The Marlies posted the only goal in the first two periods of play at 13:24 of the opening period when Adam Brooks made it 1-0 for Toronto. Despite numerous Monsters scoring chances in the third, Toronto’s Dmytro Timashov sealed a 2-0 Marlies victory with an empty-net goal at 19:30 of the final stanza.

Cleveland goaltender Brad Thiessen fell to 3-4 in the postseason despite a 24-save performance while Marlies backstop Kasimir Kaskisuo posted a 35-save shutout to improve to 6-0 in the postseason.

Next up for the Monsters, it’s Game 4 of the team’s North Division Final series vs. the Marlies on Tuesday with full coverage, live from Rocket Mortgage FieldHouse, underway at 7:00 p.m. EST.