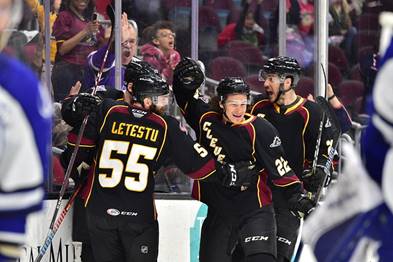 The Monsters closed out the team’s best-of-five North Division Semi-Final series with a 3-0 Game 4 win over the Syracuse Crunch on Thursday at Rocket Mortgage FieldHouse.

With the win, the Monsters advanced to the second round of the Calder Cup Playoffs for the second time in franchise history and sealed the series win over Syracuse by a three games to one margin.

Liam Foudy scored his first professional goal 6:36 into the opening period with assists from Mark Letestu and Sonny Milano to give Cleveland a 1-0 edge before Alex Broadhurst doubled the lead for the Monsters with an unassisted breakaway goal at 4:31 mark of the middle frame.

Foudy scored again at 18:02 of the second to seal a 3-0 Monsters win with Milano and Justin Wade picking up assists on the play.

Monsters goaltender Brad Thiessen earned his fifth-career playoff shutout by virtue of a 38-save performance and finished the series 3-1 while Crunch backstop Eddie Pasquale ended the postseason with a 1-3 record following a 22-save showing.

Next up for the Monsters, it’s the North Division Finals against the Toronto Marlies with Game 1 looming on Wednesday, May 1, at 7:00 p.m. at Coca-Cola Coliseum in Toronto, ON.